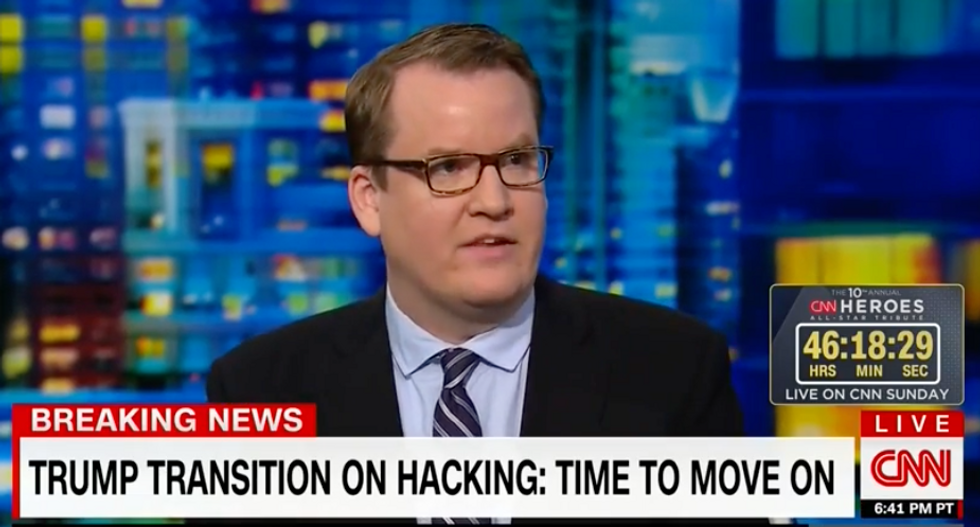 Washington Post political reporter Philip Bump Friday hit the Donald Trump transition team’s response to reports that Russia interfered with the U.S. election in an effort to help him win the presidency, arguing Trump is attempting “to undercut the validity of the sourcing” for those reports.

A Post article released Friday revealed that the consensus among intelligence agency officials is that Russia’s interference wasn’t simply to stoke distrust in the US electoral process, but to actively try and get Trump elected. Trump has repeatedly shrugged off reports of Russian interference, suggesting the reports are a partisan attempt to muddy his win in the electoral college.

Friday evening, the Trump transition team released a statement, dismissing the intelligence reports and insisting, it’s time to “move on.”

“These are the same people that said Saddam Hussein had weapons of mass destruction,” the statement reads. “The election ended a long time ago in one of the biggest Electoral College victories in history. It's now time to move on and 'Make America Great Again.’"

CNN contributor Salena Zito argued Trump is “trying to get a delicate balance,” adding “he doesn’t want anything to undermine” his election win.

“So for a story to be out there that maybe the Russians had something to do with impacting or at least spearing propaganda to impact voters, that’s going to get under his skin.” Zito said.

Bump noted that “at the same time Donald Trump in that statement essential attacks intelligence agencies—as he’s done repeatedly over the course of the campaign—he’s also supposed to be receiving briefings from these same intelligence agencies which he’s not been receiving with the same regularity as past presidents-elect have.”

“I think there’s some overlap there,” Bump said, adding, “It’s also important to note this is not one of the biggest electoral vote margins in history, but that’s sort of beside the point at this point.”

“What does that have to do [with anything,]” Lemon asked.

“So this is what I’m saying,” Bump responded. “The way I’m reading that statement is that he is trying to undercut the validity of the sourcing on this intelligence report by suggesting they also got the Iraq War wrong. Again, something he’s been doing consistently over the course of the campaign.”