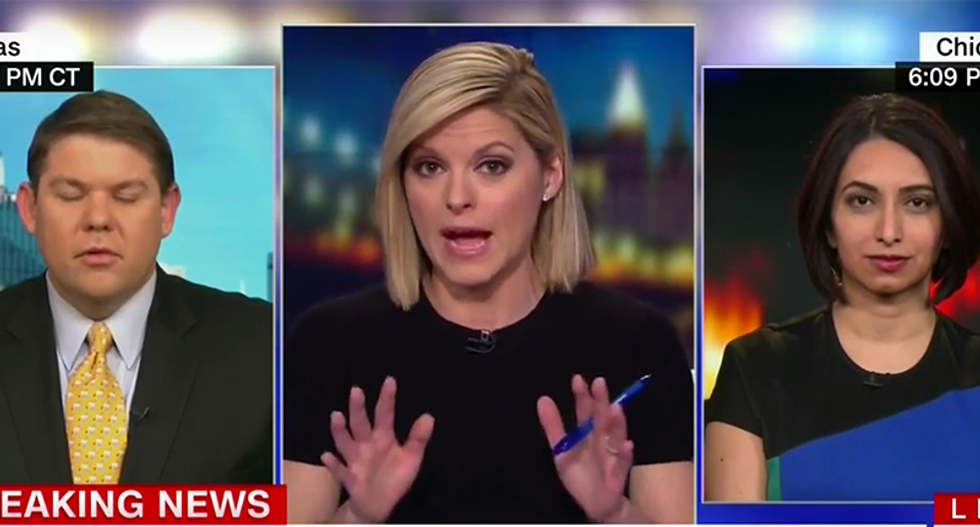 Donald Trump supporter and conservative radio host Ben Ferguson continued toeing the Trump line when he defended the Russian government from accusations that they were involved in hacking.

CNN host Kate Bolduan cited the recent statement by Trump dismissing the issue of Russian hacking and saying that Americans should move on. "Do you think that is the right response?" she asked.

Ferguson said that it was absolutely the right response because people need to "stop litigating the election and fighting over the outcome." Ferguson went on to say that he was shocked President Obama is coming out so forceful on the issues when no one knows what Russia's intent was in the hacking.

"Does that even matter?" Bolduan interrupted. "It's the fact that they hacked."

Ferguson claimed it did matter because it has happened in multiple elections in the past but people are now claiming this hack was done to sway the election for Trump. "We don't know that," Ferguson said.

Bolduan had to interrupt again to explain that there is a difference between the FBI and the CIA but both of them agree that the Russian government was hacking Americans in an attempt to influence the election.

Ferguson maintained that no one knows what the intent of the Russian hackers was.

"How about we agree that hacking by a foreign entity, in particular, Russia our adversary from the Cold War is bad," said Nayyera Haq, Former State Department spokesperson. "There is no good thing that can come out of Russia having access to cyberspace. So, forget about the reason. The fact is they did it. The president did not unlike what FBI may have done, did not take action. And now you have, while he is still a sitting president, exercising his authority and responsibility to defend American security and American accounts. This is an ongoing habit of Russia. Let's not poo-poo what Putin has been doing."

She went on to say that it was shocking to hear people acting as if Americans need to have a better relationship with an invading country. Particularly one known for "invading other countries, undermining democracies around the world and now trying to play the United States for the fool by saying, 'Oh, you know, we're going to have a great relationship after January 20.'"

Ferguson said that the sanctions were inappropriate because the facts aren't in.

"That's counter to everything I've heard from Republicans," an animated Bolduan said. "All the main Republicans, including House Speaker Paul Ryan said this is long overdue."

But Ferguson refused to relent saying that the timing is what shocks him the most. "why didn't you do this when you found out they were currently in the process of trying to influence the election," he said. He wanted to know why Obama hasn't done anything about other bad things Russia has done.

Obama said previously that they were concerned about influencing the election. The United States has acted on Russia many times before including serious sanctions.

Haq said that the message to Trump is that he should put American interest first and that the intelligence community is non-partisan and the president was following their recommendations.

Ferguson maintained that "we don't know the evidence."

Bolduan finally closed the interview by saying that the intelligence community is laying out the evidence and she would send Ferguson some notes.