‘Is that your job?’: CNN host confronts GOP Rep refusing to hold Russia accountable for hacks 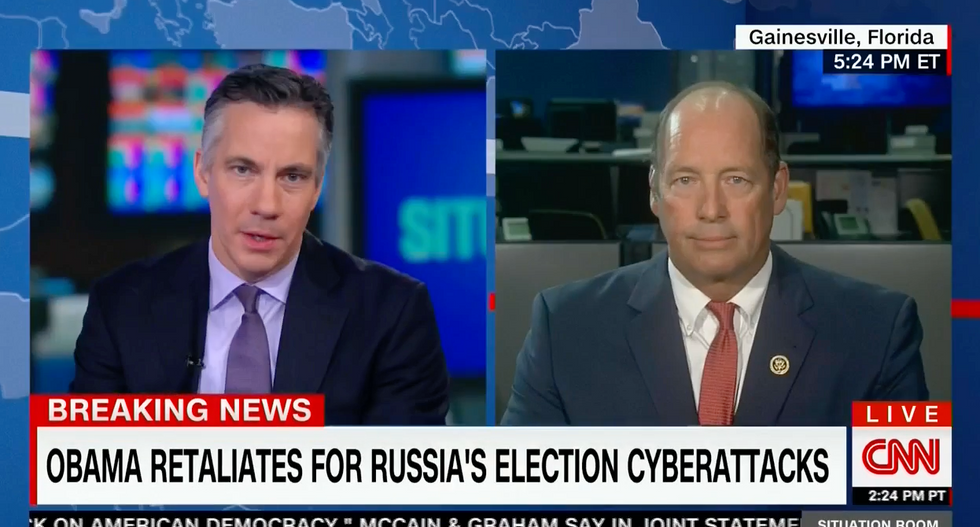 CNN’s Jim Sciutto grilled Rep. Ted Yoho (R-Fla.) Thursday over the congressman's refusal to accept the intelligence community’s consensus that Russia attempted to impact the election, reminding him it's his job to "hold foreign nations accountable" when they interfere with the United States.

Yoho insisted he didn’t “want to defend Russia if they had a hand in” interfering with election, before criticizing President Barack Obama’s administration decision to sanction Vladimir Putin in retaliation for Russia’s influence.

Yoho said if we can prove “without a shadow of a doubt that Russia was involved with this … then yes they need to be held accountable.”

“But for President Obama to move unilaterally, 20 days before he’s out of office, without consulting President-elect Trump, I think it’s a misstep in foreign policy,” the congressman added.

Scuitto noted the bipartisan agreement that Russia is behind the attack, asking Yoho, “What evidence does Donald Trump have that that consensus is wrong?”

“That’s a good question and I don’t know, you’d have to talk to Mr. Trump straightforward, but you said ‘if—‘“

“Well, what doubts do you have, if you say 'if it’s determined that Russia’s behind it?'” Scuitto interjected.

“I think if Russia has done this and it’s conclusive, 100 percent conclusive, I think there should be some form of action,” Yoho insisted. “But caution, I want to use extreme caution here because we could look at what President Obama did with Prime Minister Netanyahu when he was funding money through the state department … that interfered with a state’s election. So if we’re going to accuse another state of doing the very same thing that President Obama did, we need to be very careful on what we’re doing.”

Yoho was presumably referring to the State Department funding a series of grants in 2013-2014 for the One Voice Movement, a group that supports peaceful negotiations between Israel and Palestine. Senate Republicans accused the State Department of making political donations to influence the election.

Scuitto said Yoho’s was “an odd point to make for an American.”

“It seems you’re making a point that Vladimir Putin, frankly, has made,” Scuitto said. “You seem to be equating U.S. political action abroad with Russian interference in the U.S. presidential election, are you putting those on equal footing?”

Yoho replied that of course he wasn’t equating U.S political action abroad with Russian interference, before arguing the United States also needs to be held responsible for foreign meddling.

Scuitto pushed back: “Is it your job as a member of the house foreign affairs committee to hold foreign nations—particularly adversaries—accountable for interference in our election? Or is it to hold America accountable for operations abroad?"

Yoho dodged the question before circling back on his argument that it’s President Obama’s fault Russia interfered in the election. “The examples we’ve seen of this president interfering with other countries in their politics, it comes back and it’s going to bite us,” Yoho said.

“The other thing is we don’t have a cybersecurity policy—which I find is unconscionable—of what constitutes an attack or an act of war,” he continued. “We don’t have a policy that describes that and we don’t have policy that says what we’re going to do if that does happen and this is something this administration has had eight years to deal with and they have failed to do it.”

“I’m not defending Russia, trust me, I think the election has been held, we have moved on, let’s get on with business,” he said, “If you want to go back to how did we get to this point, well look at Mrs. Clinton having an unsecured server in a room that was unsecured with secret documents and classified information on that.”