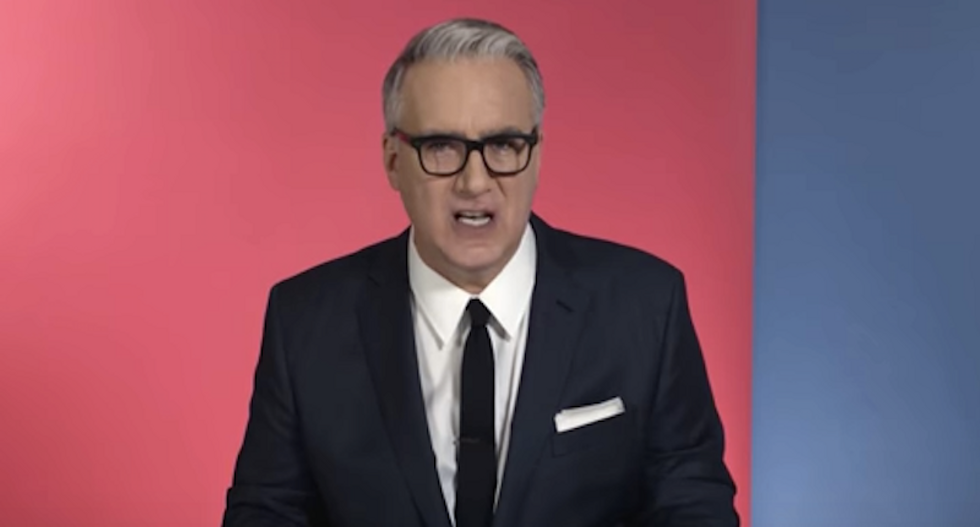 Keith Olbermann warns that the United States has nearly been overthrown by a bloodless coup carried out by a "modern-day Hitler" -- but he's not talking about Donald Trump.

"We have passed an awful milestone in our history, when the whole equilibrium of representative government has been deranged," Olbermann said.

He compared the current situation to 1938, when British Prime Minister Neville Chamberlain declared Europe had achieved "peace in our time" by handing over portions of Czechoslovakia to Nazi Germany.

"Chamberlain and much of the world thus thought he had guaranteed there would be no Second World War, just as supporters of Trump think they have guaranteed some kind of new freedom and, of course, more money for themselves," Olbermann said.

Winston Churchill, who became British prime minister two years after the Munich Pact was intended to appease Adolf Hitler, recognized the threat the German leader posed to Europe -- which Olbermann compared to the threat now facing the United States.

"The voters have guaranteed themselves slavery, defeat, economic disaster and the need to, soon or late, save this nation and restore freedom by extricating ourselves from a Trump regime by whatever process provides itself," Olbermann said.

He warned that Trump's inauguration must be resisted "by any legal means," because it would be the "first and smallest of a series of apocalypses."

"Just as in Churchill's time, we have a Hitler," Olbermann said. "No, it's not Trump -- not yet, certainly not in this context, anyway. The part of Hitler in our sad re-enactment of the months before the Second World War is played by Vladimir Putin."

In Olbermann's analogy, Trump is Chamberlain, because he sees Putin's strength but thinks he can negotiate with the Russian leader.

"(Trump) can hand him our lives, our fortunes and our sacred honor," Olbermann said. "He has already handed Putin our sacred right to vote. He will happily hand Putin a cleared path to the world domination he seeks for Russia. He will -- just so long as Putin tells him he's making a great deal and he's 'like, a smart person.' He will hand Putin this country."

He quoted the British author and inventor John Harrington, who 400 years ago observed “treason doth never prosper," because "if it prosper, none dare call it treason.”