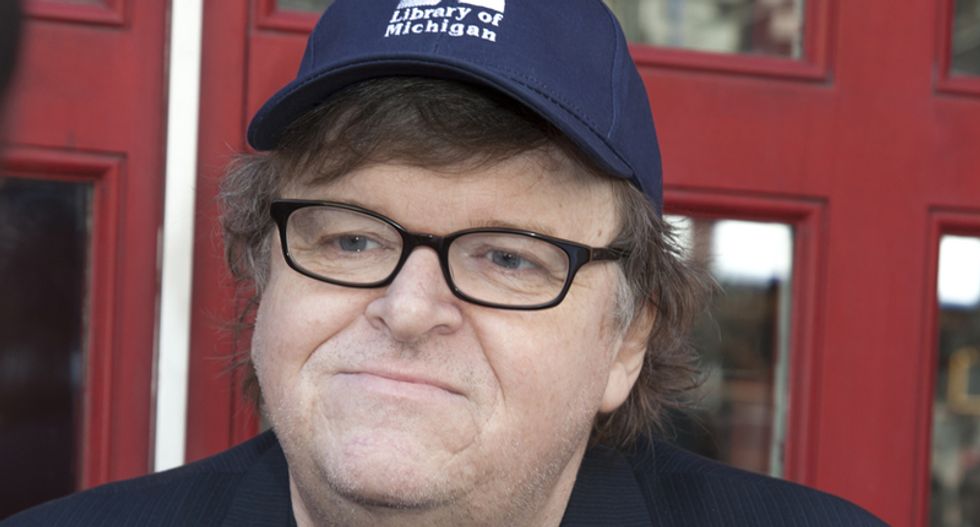 Monday is the day that the Electoral College casts its votes, and progressive activist Michael Moore wrote a special appeal to its Republican members: He's willing to pay their legal fees if they don't vote for President-elect Donald Trump.

Instead of begging with them to vote for Hillary Clinton or against Trump, Moore's argument simply asked that the members vote their conscience and not to "put our nation in danger by choosing Donald J. Trump."

"But some states have made it 'illegal' for you to vote any other way than for Trump," Moore explained. "If you don’t vote for him, your state will fine you $1,000. So here’s my offer to you: I obviously can’t and won’t give you money to vote tomorrow, but if you do vote your conscience and you are punished for it, I will personally step up pay your fine which is my legal right to do."

He acknowledged that whether they have announced it or not, as patriotic Americans they're likely concerned about the Russian hacks.

"Shouldn't we all wait until the investigation ordered by the president is finished before the Electoral College votes?" Moore asked. "If Trump did know or was involved in this unprecedented assault on our electoral process, wouldn't that be enough for you to exercise your constitutional power to stop a man like this from taking office? Or just the fact that he has refused to attend nearly all the daily national security briefings -- doesn't this give you some pause?"

"Do we want a Commander-in-Chief who is too busy or too disinterested to protect us on a daily basis?" Moore asked. "Or how about the fact that Donald Trump bragged and admitted during the campaign that his people were in touch with the Russians? How much more do you need before you get a sick feeling about all of this?"

Moore says that there's something "wrong" with Trump. "He just doesn't seem 'right,'" he continued. "One crazy comment or action after another. He may not be well. Don't you have a responsibility to protect us from someone who might be mentally unstable?"

He continued, urging the electors to "make it right" on Monday and to find the courage to do so. He even pleaded with the electors to think about the commonly used evangelical question, "What would Jesus do?"

"You are bound to God and not to Vladimir Putin," Moore wrote. "Your loyalty is to your fellow Americans, the vast majority of whom didn't vote for Donald J. Trump. But you won the Electoral College and so you get to decide. You can vote for the actual winner as decided by the American people, or you can pick another Republican who isn't Trump."

He wrote that he hopes the electors won't choose a president that will try to "please Moscow." Moore warned that there is a very real threat of terrorism and he would hope the electors would vote for a candidate who is at least casually interested in taking a daily briefing about it.

Dec. 19 is a historic day, according to Moore, and electors have a choice for where they want their name to be listed in history.

"Only 38 of you have to stand up and say, 'I love my country and I cannot in good conscience vote for a man who, whether he means to or not, may put our nation in jeopardy. I love my country more than I love this job as an elector,'" he wrote.

Using a link to the Washington Post and a Yale legal page, Moore explains the laws that surround an elector's protections.

1. Although it may ultimately have to be decided by the courts, right now you have the duty to do what you feel is right. One reason the founders set up the Electoral College was to make sure there was one final protection should someone who is a danger to the country slip through. We've established the national security danger that is Donald Trump and the possibility he had knowledge of the Russians hacking our election while it was taking place. If I were an elector for Hillary and learned she MIGHT have received helped from the Russians or the North Koreans or the Saudis, how do you think I'd be voting tomorrow? I assure you, it would not be for Hillary. You need to do the same thing.

2. But some states have made it "illegal" for you to vote any other way than for Trump. If you don't vote for him, your state will fine you $1,000. So here's my offer to you: I obviously can't and won't give you money to vote tomorrow, but if you do vote your conscience and you are punished for it, I will personally step up pay your fine which is my legal right to do.

3. If you are still worried about the legality of you voting your conscience and would like free legal advice and help, Harvard law professor Lawrence Lessig has offered to be your lawyer. Contact him at: http://www.electorstrust.org/

4. Trump, as I'm sure deep down in your heart you know, is never going to last the four years. He doesn't care about the law or following the rules and this will eventually trip him up. You know how dangerous it is when any politician, Democrat or Republican, who's a super narcissist is elected to office, they start making decisions that personally benefit themselves -- and before you know it, they're being hauled off to jail. Why not vote tomorrow for someone who's going to finish her/his term? Why risk the volatile presence of Donald Trump in the White House -- and help to guarantee another generation of Dems in the Oval Office?!

Moore began his piece acknowledging that most Republicans will likely discount what he says because he's "Michael Moore," after all. But he thanks those that were open minded enough to continued to read.