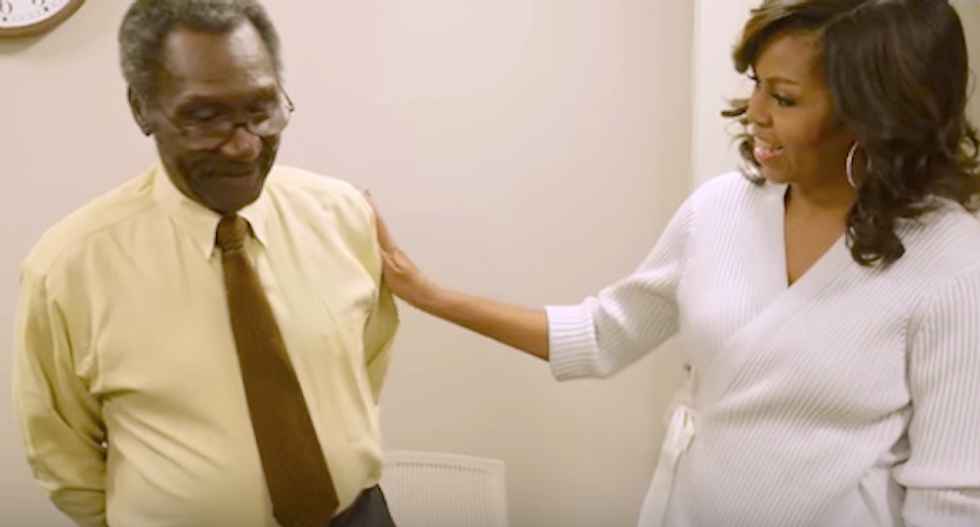 Michelle Obama has been working to get homeless veterans off the streets, and she's confident that her success can provide a blueprint for helping other vulnerable groups.

"It is utterly unconscionable that people who fought for our country would ever have to sleep on the streets when they return home," Obama told Vice.

The First Lady and Jill Biden set up a nationwide program, Joining Forces, five years ago to help veterans and their families gain access to public and private services to help them transition back to civilian life and face other challenges.

"I want to be clear that generally, our service members make smooth transitions back to civilian society – finding jobs, raising families, and establishing themselves as leaders in their workplaces and communities," Obama said. "But there are folks who, understandably, struggle when they return home, and they deserve our unwavering support."

About 11 percent of homeless Americans have served in the military, according to the U.S. Department of Veteran Affairs, and most of those homeless veterans suffer from serious mental illness and substance abuse problems.

Obama said she's proud Joining Forces has matched 1.5 million veterans and military spouses with jobs or job training, and she said the partnership can be copied to help end homelessness for other Americans.

"I want to emphasize the word 'end,' because that's really our ultimate goal," Obama said. "We know how to solve this problem – there are tried and true approaches that are working all across this country."

"The beauty of these successes is that we're showing that if we can end veteran homelessness, then we can end homelessness for other populations too – families, LGBT youth, senior citizens," Obama said.

The program has drawn praise from the military community, and former First Lady Laura Bush has campaigned for its continuation after the Obamas leave the White House, but President-elect Donald Trump hasn't commented bout its future or his family's non-legislative priorities.