'Mr. Trump, you are the gift': Putin stops by SNL to wish Alec Baldwin’s Trump a Merry Christmas 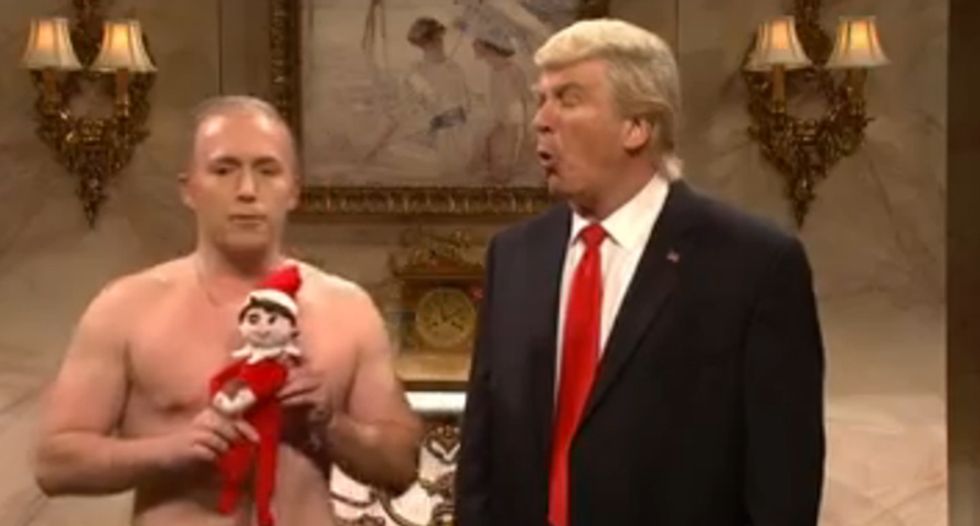 Alec Baldwin returned to Saturday Night Live to reprise his role as President-elect Donald Trump this week and was joined by special guests "Vladimir Putin" and actor John Goodman as Exxon-Mobil CEO and potential Secretary of State Rex Tillerson.

The show's opening segment found Baldwin as Trump high up in Trump Tower with Kate McKinnon as Kellyanne Conway, going over possible nominees to Trump's cabinet.

"Are there any more cabinet picks left?" Trump asked.

Conway replied that former Texas Gov. Rick Perry (R) has agreed to take the job of Secretary of Energy.

"Wasn't that a great choice? I saw him on Dancing With the Stars," Trump said. "This guy has so much energy. Un-president-ed."

"And now all I have to do is pick who's going to be president," he said.

"Can I just do it three days a week like Howard Stern does?" Trump asked.

"I don't think so," Conway replied.

They were jointed by Melania Trump. Conway excused herself, but reminded Trump, "I'll be handcuffed to you for all of history."

Moments later, the Trumps were joined by a shirtless Vladimir Putin who said, "I was just in town, you know, hiding in the walls."

"Mr. Trump, I'm here because your CIA, they are saying we Russians tried to make you win election," Putin said.

Trump replied that those are all lies made up by "some very bitter people who need to move on."

"So you trust me more than the American CIA?" Putin asked.

Trump protested that he didn't know that Putin was coming, so he doesn't have a gift for the Russian president.

"Please, Mr. Trump, you are the gift," Putin said.

Goodman appeared as Rex Tillerson. He and Putin spoke Russian and began to divide up oil-rich territories on a map while Trump struggled to be included.

"And we destroy Vanity Fair, right?" he asked eagerly. "They are a terrible publication, just terrible."