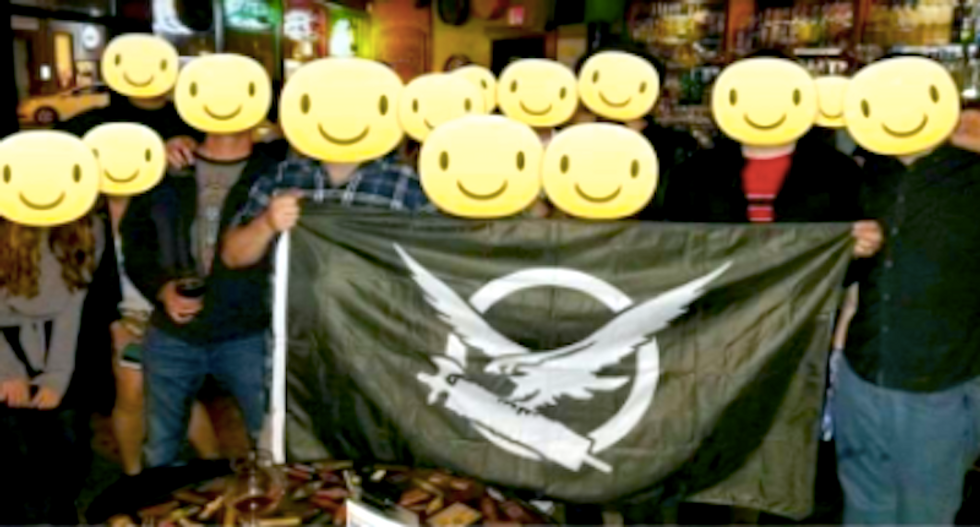 A white nationalist group duped unsuspecting bystanders into posing for a photo with their flag -- a tactic experts say was borrowed from Islamic militants.

The manager of an Omaha bar learned this week that a photo of herself and some patrons standing in front of a flag had been posted on the Twitter account of the American Vanguard hate group, reported KETV-TV.

One of the women in the photo taken at Jake's Cigars & Spirits said a couple of men asked her and some friends to join them in a photo to show veteran support, and they agreed.

The photo was posted on the group's Twitter account on Election Day, and the bar manager and patrons discovered this week how they'd been tricked after the post circulated on social media.

“I don't associate this group with politics,” said Abigail Lemke, the bar's general manager. “This is a group I associate with violence and intimidation.”

The group's Twitter account has only 300 followers, and its Nebraska chapter president claims 100 members live in the state, mostly near Omaha.

None of the group's members agreed to appear on camera, and the chapter president gave a phony name -- Sam Hyde, an internet comedian whose name has become a neo-Nazi meme -- to the TV station.

The chapter president insisted the people in the photo were members and were not duped into posing, and he said their faces were blurred in the social media post as a precaution.

But terrorism experts say that's exactly how militant extremists in other countries try to artificially boost their level of support.

Groups such as the Islamic State display their flag or other symbols behind crowds and snap photos they later claim show members rallying in support.

"We found that when they do that, they get increased funding, increased recruits, all kinds of organizational benefits," said Gina Ligon, a University of Nebraska-Omaha associate professor of management who's studied terrorist groups.

Ligon has created a database of about 80 violent extremist organizations and examined their online posts, recruiting propaganda and other activities -- and she said ISIS clearly stood out as the most professionally run.

“They keep track of exactly when funds come in, what weapons were used and how many people they killed,” Ligon said. “You don’t really see that attention to facts and details and metrics in terrorist groups.”

“This is two guys who represent an absolute extremist group espousing hatred and division, and I don't believe they're anywhere near as powerful as they want us to believe,” Biggins said. “It was certainly shocking and it certainly made me angry.”