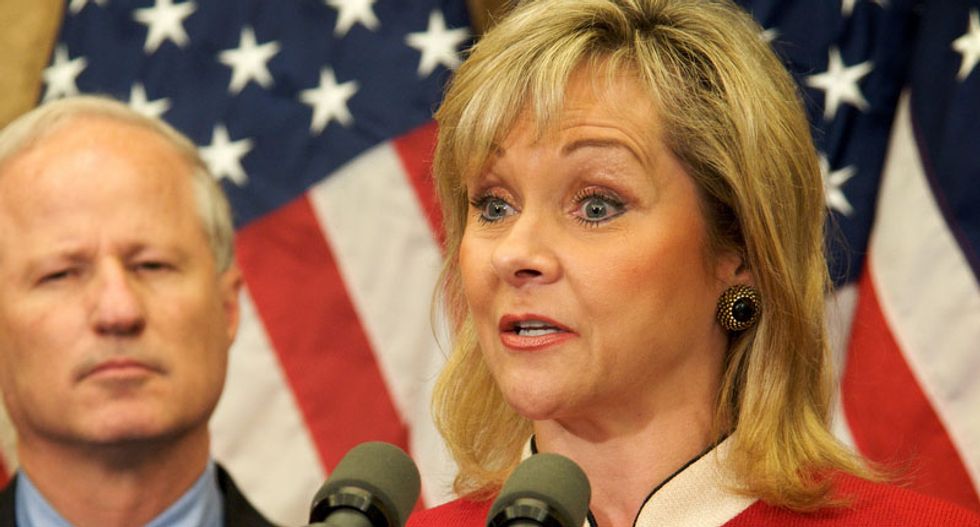 Oklahoma Gov. Mary Fallin was one of the first and few Republican governors brave enough to support Donald Trump's campaign and she did so early. Now that loyalty is lending itself to a possible administration post, and Fallin is using tax-payer dollars to help her score the next job.

Fallin flew to New York City on the Oklahoma state airplane Nov. 20-21 to talk to the President-Elect about a possible job in his administration. Trump's aide, Kellyanne Conway, later revealed that Fallin is being considered to head the Interior Department, a post that Sarah Palin was once being considered for.

According to NewsOK, Fallin's spokesman Michael McNutt, explained that Fallin's $6,000 plane ticket was appropriate because it was no more expensive than flying a commercial flight. A quick look at a round-trip flight to New York City from Oklahoma City on Google Flights reveals that the price tag is at most $2,000 and at least $1,500, a difference of $4,500-4,000.

McNutt argued that it was justified as a state visit because the two discussed energy, water and Native American affairs.

"Its use did not significantly increase the actual cost to the state and reduced travel time," McNutt said. "It also meant increased security would be available to the governor for the high-profile meeting with Trump. A check of airline flights showed that flying commercial would have cost $900 to $1,500 per person, increased travel time and an additional overnight stay."

The Google Flight search doesn't verify McNutt's claim that it would have required an overnight stay.

Fallin also made the trip in secret. The first anyone in Oklahoma and nationally knew of the meeting was when Fallin was filmed entering Trump Tower. The questionable transparency comes just weeks after Fallin was outed for using a private email server instead of a state email to organize meetings with lobbyists. Using a state email would mean that the emails could have fallen under an open records request.

Oklahoma has been embroiled in a state budget crisis for years as Fallin has followed the Sam Brownback-style of governing. The result has been a $1.3 billion budget shortfall.

Consideration for the appointment to the Department of the Interior comes just a year after Fallin slashed the Oklahoma State Park's budget by $16 million. The cuts could ultimately mean that some Oklahoma state parks will be forced to close. It's unclear if this will be the strategy for the Trump administration as well as they look at possible cuts to the budget.

Fallin did pay for her own lodging on the night of Nov. 20, but McNutt did not explain why she won't be reimbursing the state for the $6,000 for her Trump job interview.