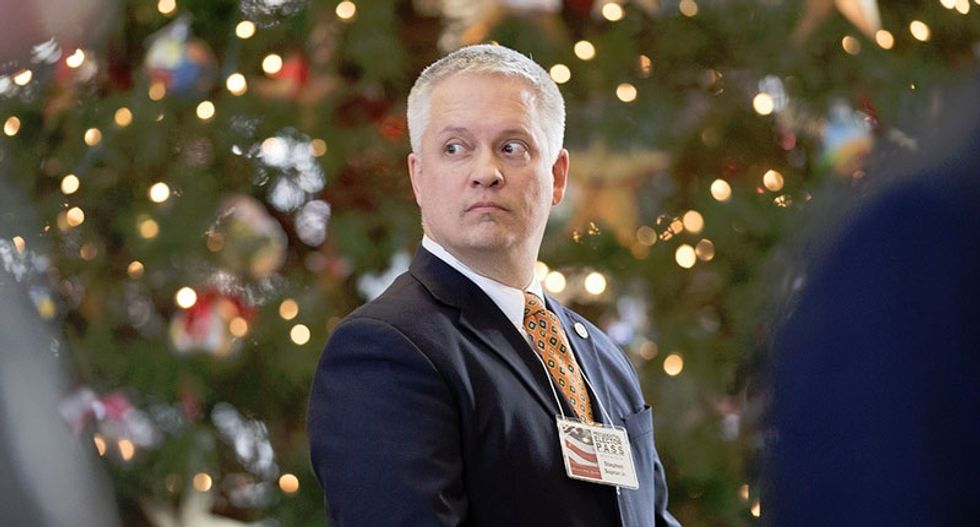 Elector Chris Suprun at the Electoral College vote in the Texas House on Dec. 19, 2016. (Bob Daemmrich for the Texas Tribune)

Chris Suprun, a Texas Republican elector, caused a stir this year by raising the possibility that he would cast his Electoral College ballot for someone other than President-elect Donald Trump.

Journalists bombarded the Dallas man with questions following his admission. Among them: For whom did he vote in November?

He didn’t vote, it turns out. But he says he tried.

“I would have voted for myself. I didn't get that chance,” Suprun told The Texas Tribune.

Suprun chose Ohio Gov. John Kasich in the Dec. 19th Electoral College vote. (Trump nabbed 36 of the 38 Texas ballots.) When he tried to vote weeks before, he said, poll workers denied his general election ballot for want of photo identification.

The self-described "voting addict" was an apparent casualty of the confusion amid legal wrangling over the state’s 2011 voter ID law.

Now, Suprun is calling for courts to clarify the rules once and for all.

“Pick a course and run with it,” he urged U.S. District Court Judge Nelva Gonzales Ramos, of Corpus Christi, in a letter dated Dec. 21.

“I write this because after not being able to cast a ballot I was disheartened,” the letter said. “I never missed an election in my life until this one.”

In July, the U.S. 5th Circuit Court of Appeals ruled that Texas' voter ID law discriminated against voters in minority groups less likely to possess one of seven accepted types of identification. The state has appealed that decision to the U.S. Supreme Court, and Ramos is weighing whether Texas discriminated on purpose.

Ahead of the November election, Ramos ordered a temporary fix: Folks without ID could still vote if they presented an alternate form of ID and signed a form swearing a “reasonable impediment” kept them from obtaining photo ID.

That’s why Suprun believed he could vote when he showed up to an early voting location in Glenn Heights on Oct. 26, even though he did not have photo ID.

Suprun said his driver’s license was inside his wallet, which he had left in a family van that was away for repairs. He said he arrived at the polls carrying his city water bill, cable bill and voter registration card — documents that should have fit Ramos’ softened rules.

But the on-site election judge turned Suprun away, saying he could not cast a ballot — even a provisional one — without photo ID, according to a complaint the elector filed with Texas Secretary of State Carlos Cascos’ office.

Alicia Pierce, a spokeswoman for that office, said she could not confirm that any complaint was being investigated. Nor could Texas Attorney General Ken Paxton’s office, his spokeswoman said.

Could Suprun have legally voted under such circumstances? That’s where it gets tricky. Ramos’ order barred poll workers from asking would-be voters why they did not have photo ID. Election judges were to allow voting as long as the otherwise eligible voter signed a form swearing that they could not “reasonably obtain” photo ID.

But had Suprun signed that form and voted, an investigation (however unlikely one might be) might have found that he had “reasonably” obtained an ID but just hadn’t brought it with him.

Whichever the case, Suprun said his story shows that Texas needs clearer voting requirements for the next election — regardless of whether they involve photo identification.

“It needs to be clear, so it’s enforced clearly. Whether we like it or not, those cute little signs on the side of the road that say 65 or 75 [miles per hour], everyone knows: Don’t go more than five over,” Suprun said.

In hopes of keeping his voting streak in alive, Suprun said he tried voting at a second location — even cutting short an out-of-state trip to do so.

There, he was told that someone had already voted under his name elsewhere — at Bear Creek Community Church in Irving.

“I had never heard of the place,” he told the Tribune. Nor did Suprun recognize the signature on the election ledger, which he viewed after filing a public records request. “It was like basically a scrawl.”

He said he notified the Dallas County elections division about the irregularity, but had yet to hear back. The division did not immediately return a message from the Tribune.

Perhaps it was a bureaucratic snafu — someone signed on the wrong line, Suprun suggested. Or perhaps it was something else. He wasn't sure.

“I don’t know what’s going on with Dallas County voters,” he said.

BY JIM MALEWITZ, THE TEXAS TRIBUNE