Union head blows off 'lowlife' Trump Twitter tantrum: 'I don’t pay a hell of a lot of attention to him' 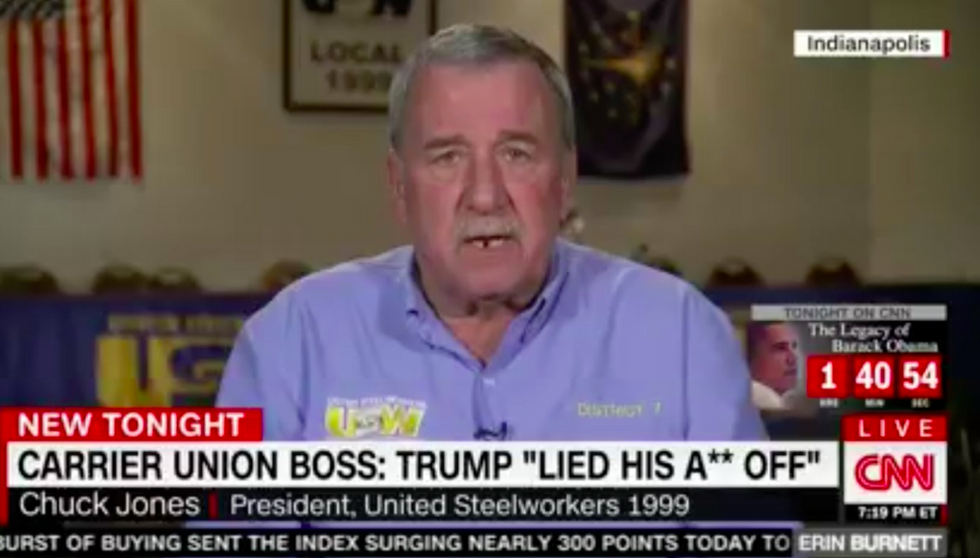 The president of United Steelworkers 1999—who yesterday charged Donald Trump with “[lying] his ass off” about the Carrier deal—defended himself against the president-elect Wednesday, insisting he’s “still gonna be able to sleep” after Trump’s personal attack on Twitter.

Responding to Trump’s tweet, Jones said his union members “are making a decent wage at Carrier" and he feels "somewhat involved with making that happen.” Meanwhile, Trump tries “keep unions out of his hotels and casinos in this country … depriving [his employees] of making a living wage," Jones said.

“So, I don’t put a whole hell lot of faith in whatever he says,” Jones added. “I just don’t pay a hell of a lot of attention to him.”

Jones said he stands by his praise of Trump for the success the president-elect did have in keeping Carrier jobs in Indianapolis, but said instead of apologizing for using misleading figures during the announcement, “he wants to attack to me. I think that’s pretty low-down, lowlife.”

“Does it bother me?” Jones asked. “No, hell no, I’m still gonna be able to sleep tonight and life will go on tomorrow for me.”

Jones said he hopes Trump will work to keep the roughly 550 Carrier jobs still scheduled to move to Mexico in the United States. “Attacking me isn’t the answer," Jones said. "I didn’t attack him; I just called him out on where I felt he misled the people—and if he doesn’t like it, that’s just tough as far as I’m concerned.”

Asked whether his statement that “Trump lied his ass off” in and interview with the Washington Post justified the president elects's Twitter-rage, Jones replied:

“It probably upset him without a doubt. But I was saying what I felt he did: He got up there and talked about 1,000 jobs remaining in Indianapolis, which is a falsehood. He got up and denied ever stating ... that he promised to keep these Carrier jobs in the country, which is a falsehood. So I was just calling him out on some of the things he was less-than-honest about. And evidently he didn’t like it.”

Jones said despite drawing Trump’s ire with his criticism, he “wouldn’t have any problem working with him or anybody else in order to try to keep jobs in this country.”

“All of us are going to disagree on certain things at certain times, but if in fact he decided he wanted to include me ... to keep these 550 remaining jobs, I would definitely work with the man.”