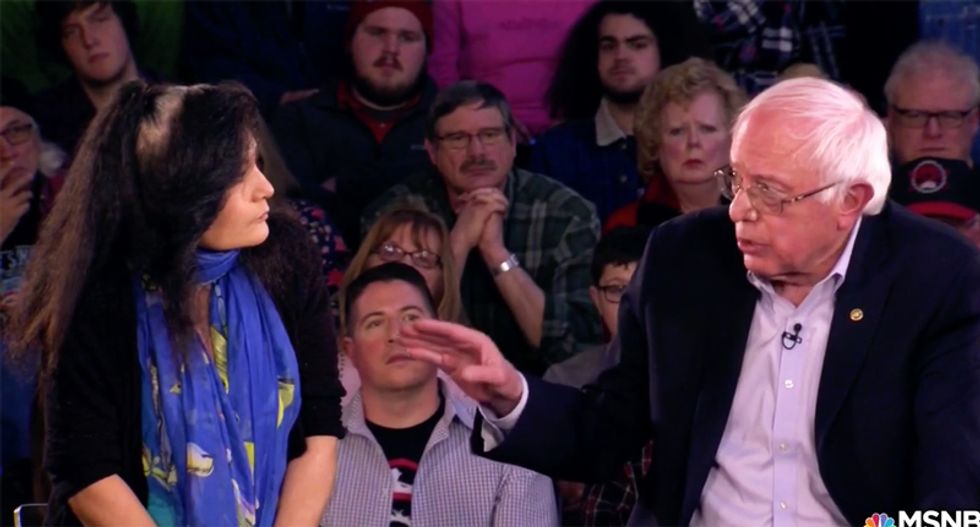 During a MSNBC town hall in Kenosha, Wisconsin -- labeled "Trump Country" by host Chris Hayes -- Vermont Sen. Bernie Sanders (I) calmly walked a Trump voter through GOP plans to gut the social safety net after she insisted that no one listened to small town voters like herself.

Introduced earlier as Gail Sparks, who claims she skipped voting in 2012 but voted for Trump in 2016 because she wanted change, the woman first complained about undocumented immigrants -- calling them "those people" -- taking jobs where she worked, which she claimed depressed her own pay.

With several panelists disregarding Trump's inflammatory rhetoric and wild claims, saying Congress would reel him in, Sparks brought up the social safety net and questioned who is paying for it in the long run.

That was when Sanders stepped in.

"Good point. Let's see if we can go forward on this," Sanders began. "I am assuming that you believe, correct me if I'm wrong, that we should not cut Social Security or Medicare or Medicaid. Is that correct or not?"

"Yeah, I believe they shouldn't be cut," Sparks replied.

"Do you know who is now working very hard to try to do that?" Sanders told her. "Republicans in Congress have a plan under the guise of saving Medicare and saving Social Security, making devastating cuts. That's what the Republicans are now trying to do."

"The other point that you made is, who is going to pay for this stuff?" he continued. "And that is a very fair point. What all of us should know is that over the last 25 years, there has been a massive transfer of wealth in this country from you to the top one-tenth of one percent. In other words, the middle class has shrunk and trillions of dollars have gone to the top one-tenth of one percent. Do you think it's inappropriate to start asking those people to pay their fair share of taxes so we can adequately fund Medicaid and make public colleges and universities tuition-free. Is that an unfair thing to ask?"

After a pause, Sparks replied, "I don't think it's an unfair thing to ask. They got rich off of us, so it's time they put back."