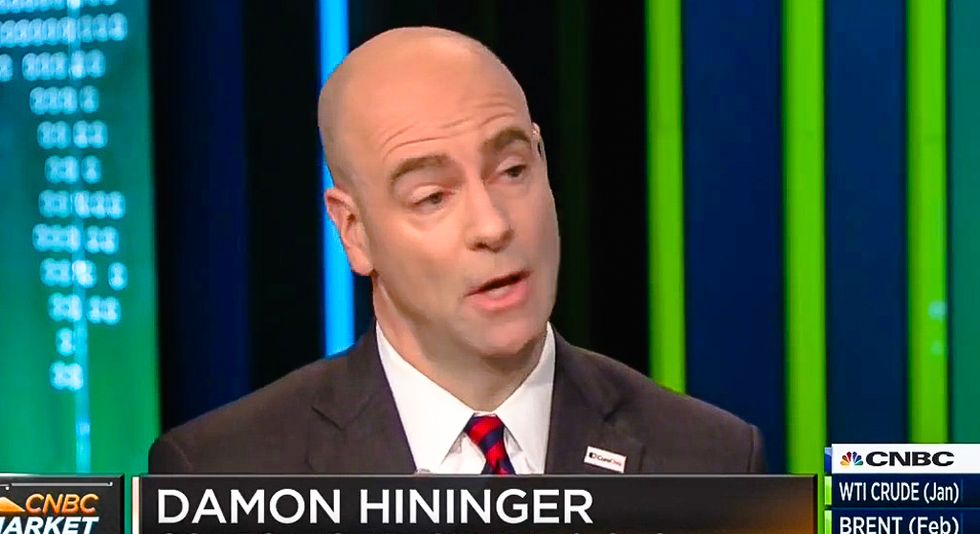 Corrections Corporation of America (CCA) CEO Damon Hininger said this week that he expects profits to soar under the new president's immigration policy.

Although CCA's stock dipped over the summer after the Justice Department announced plans to phase out the use of private prisons, Donald Trump's win caused the company's share price to skyrocket 43 percent on election day alone.

In a Tuesday interview with CNBC, Hininger said that CCA, which recently began rebranding itself as CoreCivic, saw a several opportunities in the first year of Trump's presidency, including a need for increased detention capacity for the housing of undocumented immigrants.

"You guys profit if there's more people in jail," CNBC host Brian Sullivan noted. "And that's not a way any company should be run. You have contracts and limits that say, well, you need to have 90 percent occupancy in a prison."

Hininger argued that Sullivan's charge was "baloney" because the company encourages inmates not to re-offend by offering education and vocational programs.

"We're providing a great service!" the CEO insisted. "We're making sure these individuals once they're released, they can support themselves and their family and not come back into the criminal justice system. That's great value to the government."

Hininger said that the company could "look forward to" a number of favorable circumstances in the next year under the new president.

"First of all, there's immigration," he explained. "If there is a need for more detention capacity on the border, we can provide that solution or if there's a unique population that we need to help serve with ICE."

Additionally, Hininger sees an upside in Trump's promise to rebuild infrastructure, which he believes can be provided by the private prison industry.

"A lot of discussion with the Trump administration about criminal justice reform," he promised.