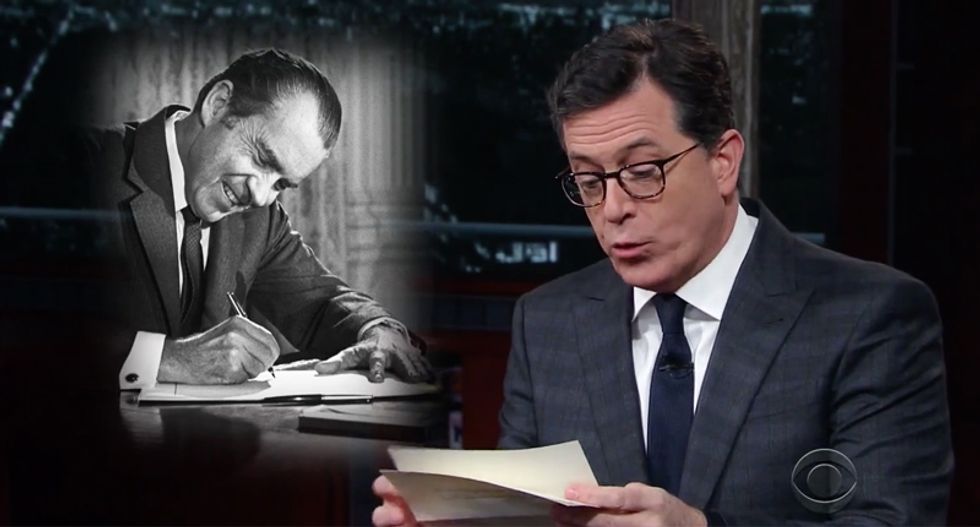 Wednesday night Late Show host Stephen Colbert busted out his Dick Nixon impression to do a dramatic reading of letters the late President Richard Nixon sent to President-elect Donald Trump -- most of which were fake.

As the CBS host noted, Trump has announced that he will be decorating the White House with a personal letter sent to him by the late President in 1987, complimenting him on an appearance on the Phil Donahue Show.

According to Colbert, that was not the only letter the future president received, saying, "We here at the Late Show have obtained from our contacts deep within the national archives a trove of heretofore unreleased correspondence from President Nixon to President Trump. These are "The Nixon/Trump Letters -- Volume One."

With that, Colbert got into character as Trump and read from the collection, with one notable one.

"Dear Donald," Colbert read in a passable Nixon voice. "Pat and I have followed your campaign closely. How do you keep getting away with this shit? I mean, leaked recordings sunk my reputation, and you talk about grabbing some p*ssy and still get elected? You got some balls, buddy. Sincerely, Richard Nixon's ghost."