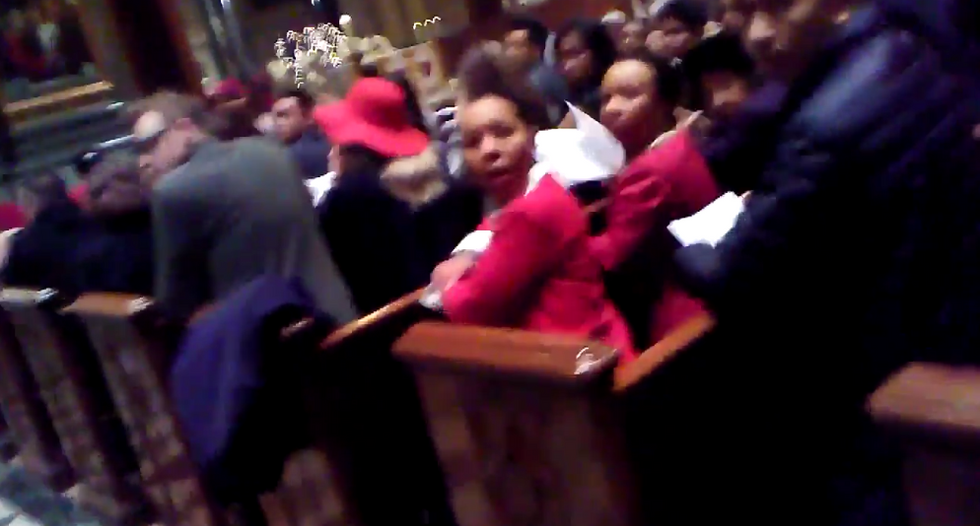 A Northeast Philadelphia man was ejected from a Catholic church Monday after interrupting the congregation’s midnight mass to deliver a diatribe about the church’s sex abuse scandal and the Pizzagate conspiracy theory, Philly Voice reports.

“The Catholic Church has been sexually abusing children—thousands of them for decades,” Caplan continued before repeating: “Pizzagate is real!”

Security eventually escorted him out of the building.

Caplan is one of several people who traveled to Washington, D.C. in November to protest Comet Ping Pong, the family pizza restaurant that conspiracy theorists allege is a front for an underground pedophilia and sex trafficking ring run by Clinton and her aide John Podesta. The theory originated on message boards like Reddit and 4chan before circulating on social media; it eventually found a platform on fake news websites, including Alex Jones’s infowars.com.

In an interview with the Philly Voice, Caplan said he was protesting Comet Ping Pong because he believes the pedophilia ring “goes all the way up to [President Barack] Obama,” adding it’s “way bigger than the emails.”

“I’m hoping Trump’s just saying in his mind, ‘That’s fine, we won’t get you on the emails but we’ll hopefully get you on this,” Caplan said, referring to Trump’s announcement last month that he would not fulfill his campaign promise to “lock [Clinton] up” for her mishandling of classified information.

Although authorities have dismissed Pizzagate as a “fictitious conspiracy theory,” an Economist/YouGov poll released Wednesday reveals nearly half of all Donald Trump supporters believe leaked emails from Clinton’s campaign discussed pedophilia and human trafficking. In early December, a North Carolina man was arrested for storming into Comet Ping Ping with a loaded gun to “self-investigate” the pizza gate allegations.

While the Pizzagate conspiracy theory has been thoroughly debunked by authorities, the sexual abuse scandal in the Catholic Church is very much real. According to CBS News, the Vatican has responded to more than 3,400 cases of sexual abuse in the past decade. Since 2004 the church has defrocked 848 priests who raped or molested children.