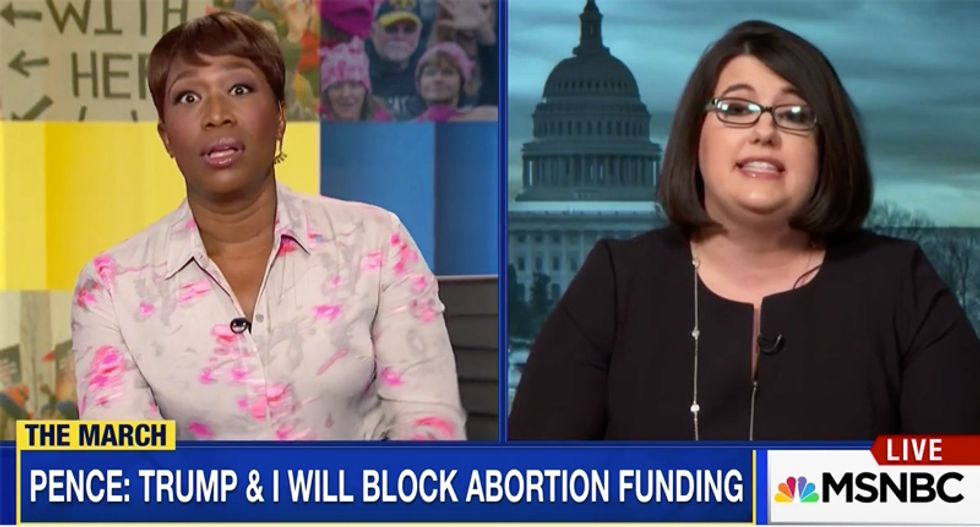 An interview on the women's march in Washington last week took a bizarre turn when an anti-choice advocate told MSNBC host Joy Reid that birth control -- including the pill and IUD's -- should be made illegal because they kill babies.

Following a considerable amount of cross-talk over services that Planned Parenthood provides with Kristan Hawkins of Students for Life, host Reid pulled her panel up and said she wanted to talk about something everyone could agree on: that contraception should be legal.

Not everyone was in agreement.

"I believe certain forms can be legal, yes," Hawkins agreed, adding, "I don't believe abortion causing contraception should be legal."

"What kind of contraception are you talking about?" Reid asked, with Hawkins replying, "Hormonal contraception."

"You think IUDs should be illegal?" Reid pressed.

"I don't think they should be legal, "Hawkins replied. "They put women at risk and they kill children."

"What about the birth control pill?" the unrelenting Reid asked.

"I do not think it should be legal, I think that shouldn't be legal," Hawkins replied before trying to change the subject.

"We've gotten some real clarity," Reid said as she concluded the interview. "I think the American people have gotten quite a bit of clarity on what your movement wants to do."