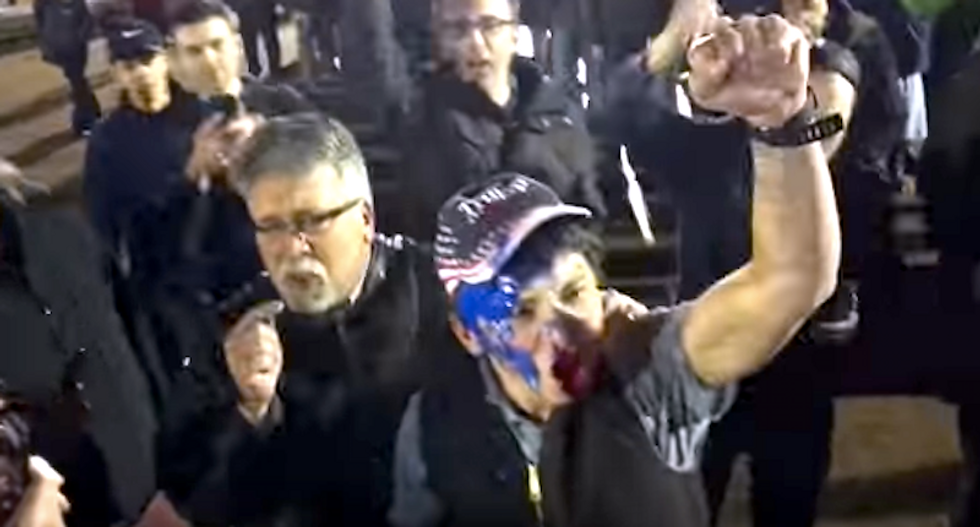 A man was shot and critically wounded over the weekend at the University of Washington during a chaotic speaking appearance by an editor from the right-wing Breitbart News website.

The "alt-right" website initially reported the shooter had been one of the anti-fascist demonstrators who showed up to protest conservative blogger Milo Yiannopoulos at his last appearance on the "Dangerous F*ggot" speaking tour, reported Hatewatch.

But the 34-year-old victim's friends and witnesses to the shooting have contradicted some of those initial reports.

A crowd gathered outside the event Friday afternoon, and campus conservatives clashed with a variety of protesters as about 250 attendees poured into the auditorium, reported the Seattle Times.

Some of the right-wing speaker's fans were unable to get into the event, and they argued with demonstrators and unfurled a "Pepe the Frog" banner celebrating the "alt-right" mascot as they chanted Donald Trump's name.

The arguments turned to shoving and then punches, and Hatewatch reported that "Black Bloc" protesters punched an aggressive Donald Trump supporter in the mouth and shot him in the face with a blue paint ball.

The young conservative was then pulled to safety by his father, the website reported.

The crowd gathered outside threw bricks and other items at police in riot gear, and several people were struck by paint balls.

The shooting came amid this chaos, but some initial reports have turned out to be exactly wrong.

The shooter claimed he had shot a white supremacist in self-defense, but the victim -- who remains hospitalized with life-threatening injuries -- appears to be one of the anti-fascist demonstrators.

The gunman and a friend were arrested after turning themselves in, but both men were released without charges after claiming self-defense.

Washington allows deadly force when a person fears serious injury or death, but its self-defense law does not address whether they have a duty to retreat.

Eyewitnesses told Hatewatch the shooter, who was described as an Asian man, was an apparent Trump supporter who had been trying to provoke the crowd.

The victim, according to friends, was a Bernie Sanders supporter who was protesting against Yiannopoulos -- who was permanently banned from Twitter over complaints about racist and misogynist bullying of other social media users.

UPDATE: Condition of man shot at UW protest improves from critical to serious, breathing on his own after surgery.… https://t.co/MI2zyIRYvH
— The Seattle Times (@The Seattle Times)1485196507.0

The wounded man has an anti-hate tattoo of a red slash striking through a swastika, and witnesses said he'd been trying to calm others during the clash.

“He has always been of the mind to be compassionate, empathetic and to educate," said friend Daniel Herrera. "That’s his goal."

The victim underwent surgery Monday, and his condition was upgraded from critical to serious.

Yiannapoulos continued his speech even after learning a person had been shot, saying he would not be intimidated by violence.

“If I stopped my event now, we are sending a clear message that they can stop our events by killing people," he said. "I am not prepared to do that."