Bill Nye compares Trump to people who believe in astrology: They're so invested in belief they ignore facts 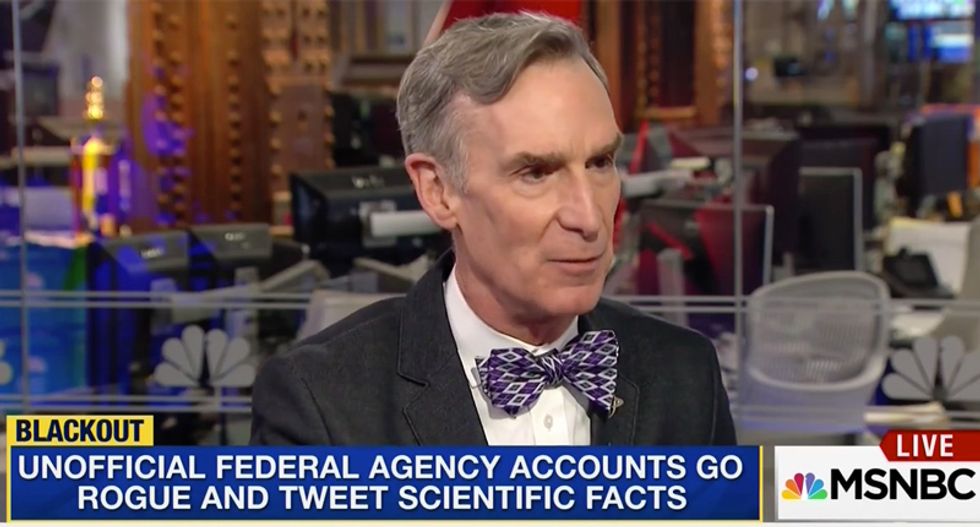 Appearing on MSNBC, "Science Guy" Bill Nye explained the pathology of President Trump and why his administration is clamping down on government agency scientists, diagnosing the president with suffering from "cognitive dissonance."

Speaking with host Joy Reid, the popular science educator was asked about the executive order signed by Trump that critics fear will chill scientific inquiry as the Trump administration substitutes "alternative facts" for peer-reviewed research.

'Well, any time you're burning fossil fuels, you authorize more pipelines, you're headed for trouble in the big picture," Nye began. "But in the bigger picture is this thing, you know, this word we love, 'cognitive dissonance,' this phrase. You have a worldview that disagrees with what you observe. So you might expect, if you were as open-minded as a scientist, as a scientifically-literate voter or taxpayer, you might expect that data would change your mind -- but that's not how people are."

"People on either side, the other side and this side, you double down  when you find conflict, it's called the 'Backfire Effect,' it backfires, and you get more entrenched in your worldview," he continued. "For example, if somebody believes in astrology, it takes them about two years to get over it. You have to show them over and over there's no such thing as astrology, it doesn't really work, and then they let go. But everybody's expectation that you'll let go in a week is not going to met."

"So our problem, everybody, is this doubling down, this backfire effect.," He added. "So we have to work, I think, diligently in the science community to fight back. Of course there are the facts, we start with those. But there's this human nature thing on both sides to fight back. We have our bubble over here, they have their bubble over there."