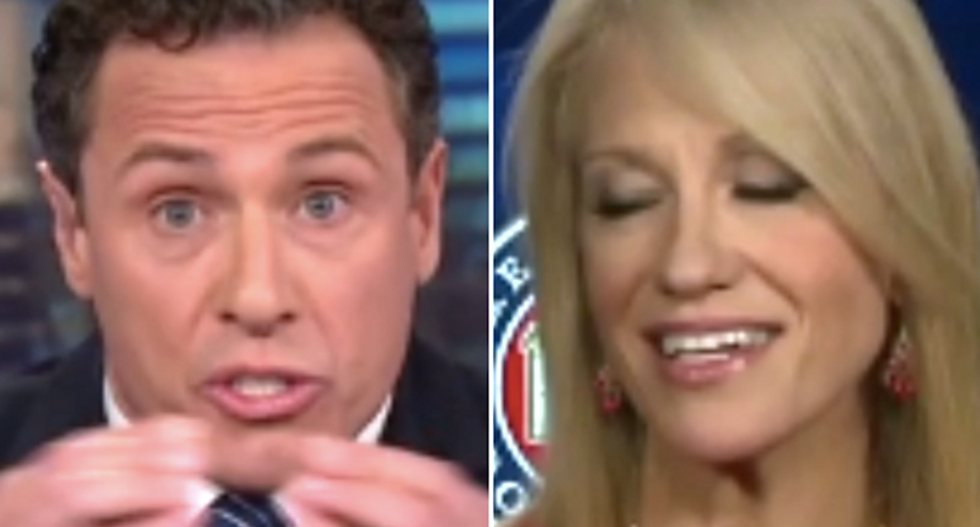 Kellyanne Conway cast blame in all directions as CNN's Chris Cuomo grilled her on what Donald Trump knew -- and when -- about Russian interference with the election.

"Did (Director of National Intelligence James) Clapper come out in early October and say we know it was Russia?" Cuomo asked.

Conway deflected by asking what President Barack Obama had said in response, but Cuomo wasn't having it.

Trump's former campaign manager, who now serves as a senior advisor, appeared Friday morning on "New Day" ahead of the president-elect's briefing by intelligence officials, who are expected to identify the Russian officials who fed purloined emails to WikiLeaks.

"Finish the sentence, what is it that we're trying to know -- that Russia is trying to interfere with the election results?" Conway said. "Do you really think that Russia wanted Donald Trump to be elected president?"

Cuomo asked the same question a third time, and Conway changed the subject to reports showing the Democratic National Committee had "rebuffed" the FBI when investigators requested direct access to the party's servers and data.

"Hey, Chris -- if it's irrelevant, why did CNN report on it?" Conway said.

Cuomo pressed on, asking why the president-elect refuses to acknowledge evidence that the intelligence community agrees shows Russian involvement in the DNC hacking -- but Conway threw her boss a pity party.

"Speaking of disparagement, I really believe there are those out there that are trying to delegitimize his presidency, review the election results -- and you know it," she said.

Conway blamed Obama and Hillary Clinton for the hacks, saying they were so certain Trump would lose that they didn't seriously address Clapper's warnings about Russian interference.

Cuomo asked why Conway could not separate her feelings about the election from her acknowledgment of Russian involvement.

"It seems to be motivating the president-elect to disrespect our intelligence agencies," Cuomo said, citing several examples. "It seems like you can't divorce these two notions, and it's creating a really tough situation."

Conway condescended the CNN host, saying she knew he was very passionate about the topic.

"Sure I am," Cuomo said. "Russia trying to hack during our election being ignored by the president-elect? That's troubling."

"No, it's not," Conway said, to Cuomo's astonishment. "You're just making conclusions up now. Yes, you are."

She questioned Cuomo's use of negative words, such as disparagement, to describe Trump's attitude toward intelligence agencies -- but the CNN host said he was quoting Clapper and the president-elect's own statements.

"I'm trying to put the facts out there, because you're ducking the obvious -- and I don't know why," Cuomo said.

"I'm not ducking," Conway said, tucking her chin toward her shoulder. "Hey, Chris -- by the way? I'm not ducking a thing. Not my style."

Kellyanne Conway and @ChrisCuomo clash on known information about the Russian hacking. https://t.co/0tR2UL2yc1