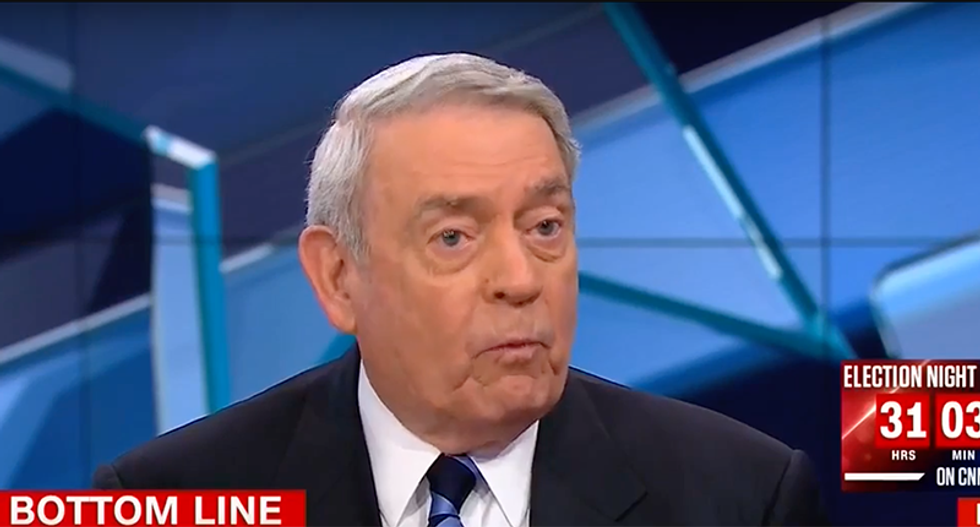 Unsurprisingly, veteran newsman Dan Rather sided with the press over Donald Trump on whether CNN and BuzzFeed should have published the documents used to brief President Barack Obama, Vice President Joe Biden and President-elect Donald Trump.

"I acknowledge that I’m a little old-fashioned on this by some people’s measure," Rather told Vanity Fair. "I’m a publish-and-be-damned guy. I don’t believe in being irresponsible. Others will have to judge how well or how poorly I’ve done it...Any way you cut it, this was news—news that he had been briefed on what intelligence believed the Russians had. If I had that story, would I have run it? Yes."

Rather argued that CNN specifically went to considerable links to say that the allegations were unverified. Trump adviser Kellyanne Conway argued Wednesday night with Anderson Cooper that because CNN linked to the documents it was the same as reporting what was said in the documents.

"It’s news that an intelligence agency would tell an incoming president that this is what we think is worth considering that the Russians knew about you," Rather said. "I think CNN made the right decision having that story."

He explained that news is supposed to be about things that people need to know that the powerful people don't want them to.

"So much else is just advertising and propaganda," he continued. "If you distill the Trump response, a summation, it’s yes, I should be told about this but nobody else should know about it. He’s a powerful person who thinks certain things shouldn’t be shared with the public, and I disagree with that."

However, Rather concluded that he is skeptical about the claims about Trump.

What is concerning for Rather is the cozy relationship Trump seems to have with certain members of the media. News personalities Joe Scarborough and Sean Hannity are said to be wooing the president-elect. Rather questioned their journalistic integrity.

"So, if you can get access to Donald Trump, you’re golden," Rather explained about the ratings numbers. "But to get access to Donald Trump, by and large, you have to engage in sweetheart coverage. It’s a tradeoff. The reality for the journalist is if you’re working for Network A and you say, 'I want access but I’m not willing to pay any price to get it,” and Network B is willing to pay that price, you’re in trouble right away. As soon as he appears somewhere else, your boss is looking up your nose saying, 'What the hell is wrong with you?'"