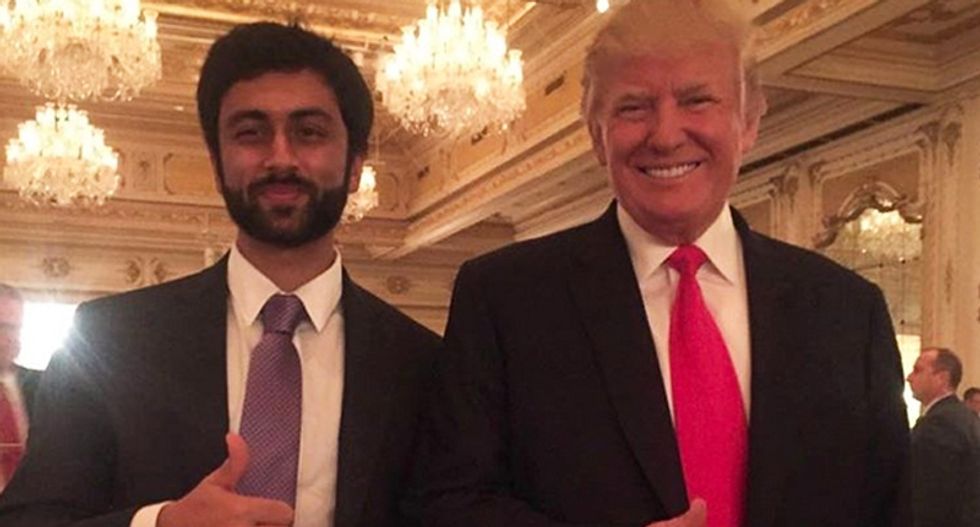 Despite obvious conflicts of interest, President Donald Trump and his family hosted foreign business partners and posed for pictures with their families during the new president's inauguration weekend.

According to Mother Jones, Trump met with foreign billionaires before his swearing-in ceremonies, with the visiting businessmen later sitting down to a private lunch with Donald Trump Jr.

On the Monday following his inauguration, Trump signed a 19-page document from the Trump Organization stating that Trump had resigned from positions in more than 400 corporate entities.

Among those meeting with Trump was Dubai-based real estate developer Hussain Sajwani , chairman of DAMAC Properties which has partnered with the now-president on golf courses and luxury housing in the Middle East.

Trump also hosted Sajwani at his Mar-a-Lago resort on New Year's Eve, where he praised the developer.

The president noted on Jan. 11 that, despite hobnobbing with Sajwani he had turned down a massive business deal with the businessman, saying, "Hussain, DAMAC, a friend of mine, a great guy. I was offered $2 billion to do a deal in Dubai, a number of deals, and I turned it down. I didn't have to turn it down because as you know I have a no-conflict situation because I'm president."

In an interview last month, Sajwani said he was pleased with Trump's election, saying, "Naturally, I think we will benefit from the strength of the brand going forward,"

With Trump supposedly separating himself from the business that bears his name, any further dealings with DAMAC would be handled by Donald Trump Jr. and Eric Trump who now control the company.

According to Mother Jones, Trump and his children also met with Indonesian billionaire Hary Tanoesoedibjo and his wife Liliana, with the businessman's wife posting video online of them being whisked through crowds of gawkers who came to witness the inauguration.

Trump is currently developing a pair of luxury resorts in Indonesia with Tanoesoedibjo which was negotiated before he was elected president.

As all of this is going on, multiple legal analysts are still predicting that Trump may be in violation of the "Emoluments Clause" in the U.S. Constitution which would prohibit dignitaries from foreign governments from staying at the president's Trump International Hotel in D.C.