If Trump knew what Alex Jones said about him, he wouldn't give him press credentials 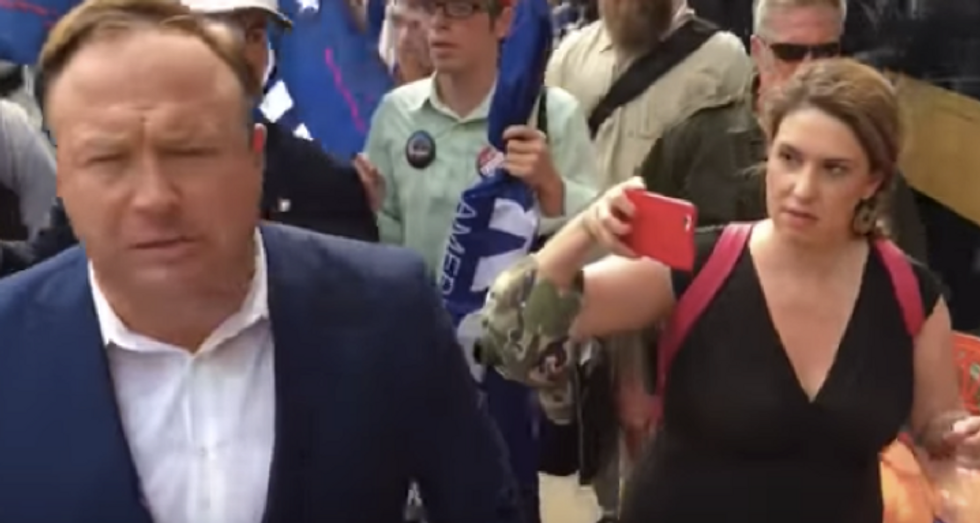 Conspiracy theorist Alex Jones, who was into spreading alternative facts way before it was cool, claimed that he was granted White House press credentials in a video he released on Wednesday. But the White House is denying the claim, probably because they're a bunch of breastmilk-denied, fluoride-poisoned, retarded, low-grade moron, globalists.

While it's impossible to know whom to believe in this alternative facts tête-à-tête, one thing is clear: if the extremely thin-skinned The Donald knew what The Alex Jones had said about him, he wouldn't let him near the White House...

When a few Raw Story writers went to cover the Republican National Convention, I was blessed enough to run into Jones on the street. Since I hadn't expected to meet him and had to maneuver ducking under his entourage, I stalled with some small talk and asked him if he was enjoying himself. He quite deftly pivoted from the personal to the political, saying "I like standing up against tyranny, yeah." In other words, he was, indeed, enjoying himself.

But that's not the damning part. During the exchange, Jones told me he was supporting Trump. When I asked him if he had any reservations about the nominee, a candid Jones confided, "I don’t like some of the torture stuff." He qualified that by saying, "but at least he’s honest about it. With Hillary, she wants to mount America’s head on the wall." When I asked Jones what that meant "policy-wise," he responded, "It means she just wants to piss all over the country like a big fat goblin." Though Jones' support was unwavering, it's unlikely The Donald would tolerate any criticism of his pro-torture stance.

Of course many in the media have criticized Trump's position on torture, which he reaffirmed Wednesday during his first TV interview as President of the United States, telling ABC, “absolutely I feel it works.” But Jones is supposed to be better than the "leftist mainstream media," which "promote tyranny."

Below is the transcript of our exchange as well as two versions of our encounter. Much like the truth, run-ins with Jones have two sides.

Katie Halper: Are you enjoying yourself?

Alex Jones: I like standing up against tyranny, yeah.

KH: Where is the biggest threat of tyranny coming from?

AJ: From our globalists that are running our government into the ground.

KH: And between Hillary and Trump?

Shofar-Player: Hillary’s a witch, she’s into witch craft, she’s a jezebel. We all know who she is.

KH: And any reservations about Trump?

AJ: Yeah, I don’t like some of the torture stuff, but at least he’s honest about it. With Hillary, she wants to mount America’s head on the wall.

AJ: It means she just wants to piss all over the country like a big fat goblin.

KH: And any other messages for people?

AJ: Well, we’re standing up. The day’s of laying down are over so get ready for a fight. You wanna fight? You better believe you got one.