It's 'taken worry away': Trump voter says he hopes Trump doesn't take away his Obamacare 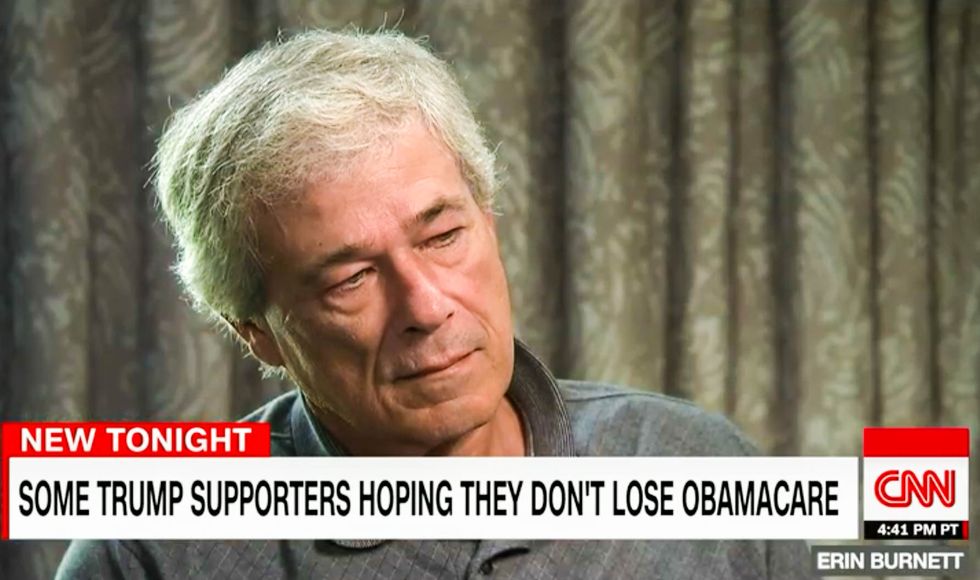 Given that well over 60 million people voted for Donald Trump in 2016, it stands to reason that some of those voters are also people who benefit from Obamacare.

On such voter is Bob Ruscoe, who tells CNN that he hopes Trump really thinks carefully before ripping away health insurance from the tens of millions of people who now get their health insurance through the Affordable Care Act.

"We'll have to see what pans out," he said. "It may not be totally repealed. It may be something else. I hope something will remain in place."

For many years, Ruscoe could not obtain any form of health insurance because insurers were scared off by his weight, which at one point topped 300 pounds.

Once Obamacare went live in 2014, however, Ruscoe said he could get an affordable plan for him and his wife that cost $338 per month, whereas without Obamacare he'd have to spend $1,150 for the same plan.

So given that he has directly benefited from the program, why did he vote for someone who vowed to repeal it? According to Ruscoe, he believed that Trump would have been better for the country overall because he'd help boost economic growth.

"I did what I thought was correct for the overall good of the country," he tells CNN. "I think economic strength cures a lot of things."

Nonetheless, he says that "the health care act has taken worry away" about his medical problems, and he hopes Trump finds some way to keep something similar in place.

Check out the full video interview of Ruscoe below.

The state Bureau of Elections has recommended that five of the 10 Republican candidates hoping to oust Democratic Gov. Gretchen Whitmer should be kicked off the ballot prior to the Aug. 2 primary due to tens of thousands of forged signatures.

Cannes favorites stick up for migrant kids in EU

Two-time Cannes winners Jean-Pierre and Luc Dardenne said on Tuesday that their new film was a call for the EU to do a better job in protecting the most vulnerable child migrants.

"Tori and Lokita", one of 21 films competing for the festival's Palme d'Or top prize, tells the story of a boy and a girl from Benin who pretend to be siblings to help win asylum in Belgium.

Before the war, it was called "Moscow Avenue". But now this wide boulevard which runs through Ukraine's second city has been renamed "Heroes of Kharkiv" in honor of those fighting against invading Russian forces.

"Here in Kharkiv, there is no place for an avenue named after the capital of the occupier that is killing our people," explains arts student Evgen Deviatka on the newly named street running through the heart of the northeastern city.