‘Let them in!’: Protesters gather at JFK Airport to shout down Trump's 'unjust' immigrant detentions 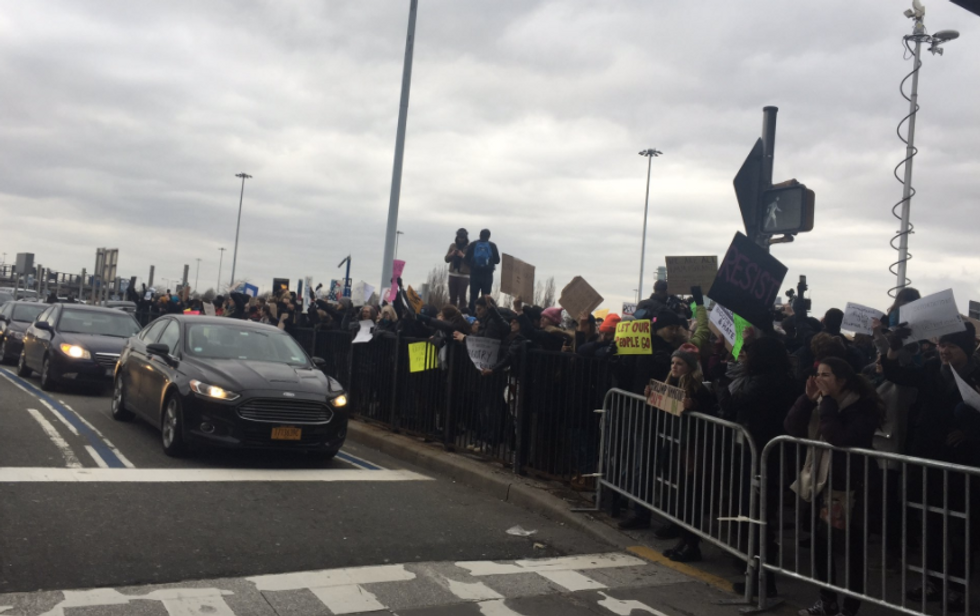 On Saturday afternoon, a protest at New York City's John F. Kennedy Airport (JFK) against Pres. Donald Trump's draconian immigration policies swelled and gathered steam as Democratic politicians spoke and the crowd chanted "Let them in!" about immigrants being detained under the new policies.

"Mr. President, look around, this is America," said U.S. Rep. Nydia Velzquez (D-NY) during a press conference. "What you've done is shameful. These are Americans."

Trump's ban on arriving refugees and even green card holders from certain countries is going to sow "confusion," Velzquez said, "Not just among working families in America, but also, it's creating confusion with the people who are working in Homeland Security. This executive order is arbitrary. It doesn't provide real guidelines and it's unjust."

Trump signed sweeping executive orders this week banning Muslims from certain countries from entering the country and placing restrictions on immigration. On Friday night, customs and border control officials put the bans into effect and detained a number of individuals including an Iraqi man who performed heroic duties as a translator for the U.S. armed services during the Iraq War.

Hameed Khalid Darweesh was released Saturday after a scrum of civil rights attorneys and other activists launched actions to protest his detainment. Darweesh and his family are traveling to the U.S. to seek treatment for his son, who suffers from liver disease.

“We’ve gotten reports of people being detained all over the country,” said Becca Heller -- director of the International Refugee Assistance Project -- to the New York Times. “They’re literally pouring in by the minute.”

The hastily penned and implemented executive order, said the Times, is being "chaotically, with agencies and officials around the globe interpreting it in different ways."

Watch videos from the protest, embedded below: