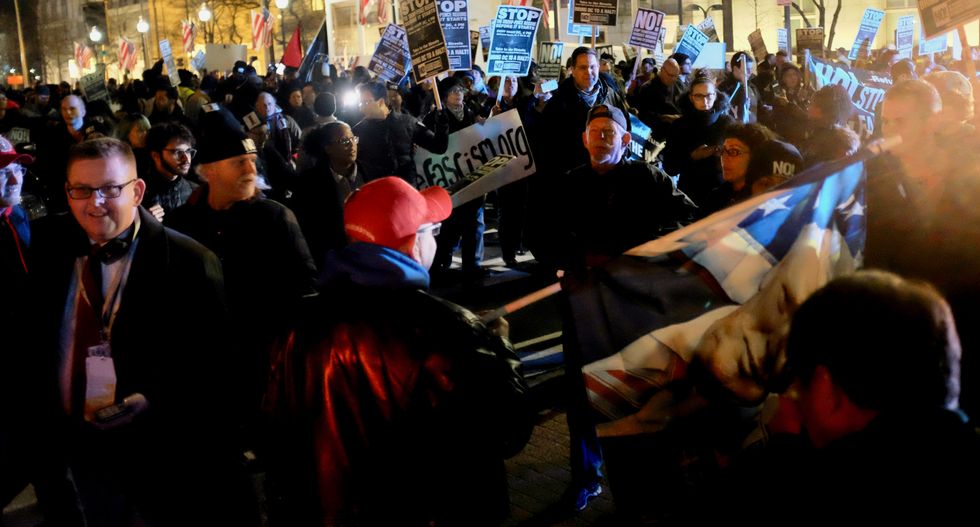 A supporter of President-elect Donald Trump carries a flag bearing Trump's likeness into a march of protesters against Trump along the inaugural parade route outside the Trump International Hotel on Pennsylvania Avenue in Washington. REUTERS/James Lawler Duggan

During Friday’s inauguration protests, more than 200 people were arrested and charged with felony rioting, a crime that carries up to 10 years in prison and a $25,000 fine. Among those facing a decade in prison were at least seven journalists covering the protest, rounded up by D.C. metro police due to their proximity to the unrest.

Though Washington D.C. is no stranger to mass arrests–having settled millions in lawsuits after arresting over 400 during 2002 anti-World Bank protests–the shockingly stiff penalties being leveled are, according to multiple reports, with few precedents. According to The Washington Post:

Longtime D.C. defense lawyer Heather Pinckney said that in the 15 years she has practiced, she does not remember seeing demonstrators charged with felonies. Typically, she said, protesters are charged with misdemeanors or given citations and sent home.

The journalists in question include Alex Rubenstein of RT, Evan Engel of Vocativ, independent photojournalist Shay Horse, Story of America producer Jack Keller, livestreamers Matt Hopard and Alexei Wood, and an unnamed freelancer. All face up to ten years in prison and a $25,000 fine for felony rioting.

While foreign and new media outlets such as The Guardian, Buzzfeed, City Lab, Daily Beast, and Huffington Post have reported specifically on the arrests of journalists (as has traditional outlet US News) most major media outlets in the United States have remained surprisingly silent. The Wall Street Journal, CNN, and MSNBC have not reported on the arrests at all. Washington Post’s report on the episode was framed in a decidedly pro-police terms–complete with an apocalyptic burning limo (that, it should be noted, was set on fire after the arrests in question) and the ominous, conspiratorial headline: “Protesters who destroyed property on Inauguration Day were part of well-organized group” 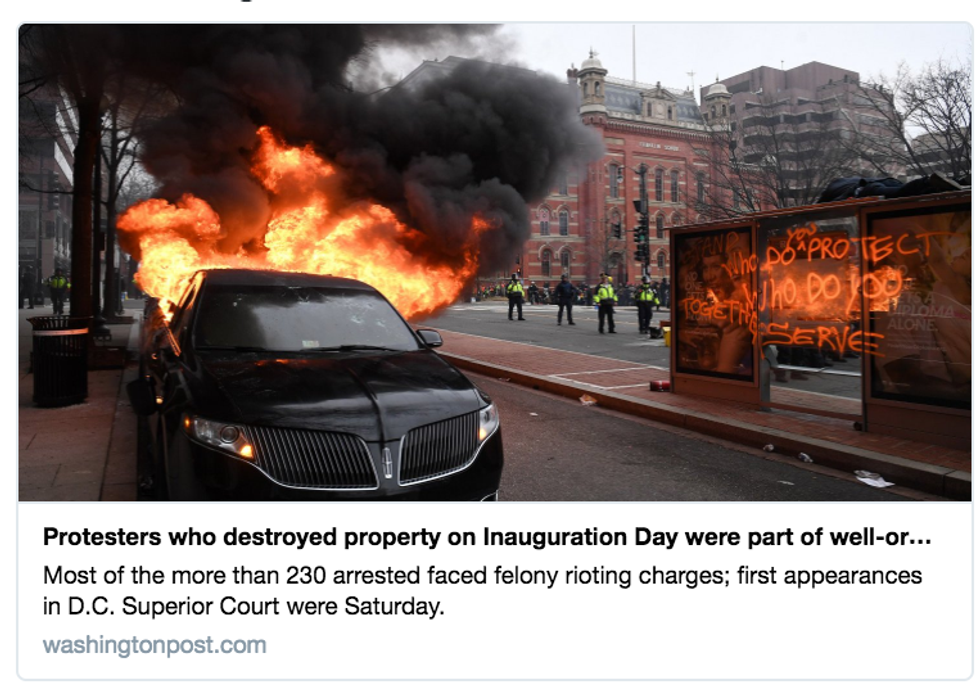 The piece ignored that journalists and activists were among those arrested entirely. Instead the article focused on a reckless band of hooligans out for violence:

The preparation undertaken by protesters included arriving armed with hammers and crowbars, police said in court filings that also said officers moved in to make arrests after windows were broken on storefronts and a city emergency vehicle, and a parked limousine was set on fire shortly before President Trump’s swearing-in ceremony.

Before protesters took to the streets, leaders of an umbrella organization for the demonstration operated a detailed website, designated a media spokesman, had “street” medics to tend to injured demonstrators and said in news releases that the group included protesters who were willing to be arrested.

A well-coordinated assault campaign included no mention of the activists, medics, and journalists that just happened to be in the proximity. In their report, TV network CBS also led with the flaming limo picture and didn’t bother to mention journalists were among those arrested.

This is in stark contrast to how the event would be covered if it were to happen overseas. No doubt headlines would scream “Journalists Among Dozens Arrested by Trump Regime” or “Crackdown on Resistance Marchers as Far-Right Government Takes Power.” Here, seven journalists and at least a dozen other activists facing a 10-year sentence for simply being in the wrong place at the wrong time hardly registers a perfunctory AP write-up by major media.

To add urgency to the issue, either by design or accident, a shift to much harsher tactics seems to have ushered in the Trump administration. In addition to statements by D.C. attorney Ms. Pinckney to The Post, Jeffrey Light, a Washington D.C. lawyer, told AlterNet Monday, “I have been representing protesters for 13 years now, and I have never seen felony rioting charges in Washington, D.C. It is not one of the standard laws that they tend to use. This is unusual. It is rare to use that charge.”

As media outlets have justifiably warned about the potential crackdown on free press in the Trump era, it’s notable that the first and most concrete example of just this would go so underreported. It’s likely the lumping of journalists with some property damage and lit cars made the case slightly less sexy for media observers, but the fact remains: seven journalists are facing the better part of the 2010’s behind bars for the simple act of reporting.

Take Newsweek, which has repeatedly warned of the dangers Trump poses to the free press. In its brief mention of the mass arrests, it uncritically held it up as a contrast to the “peaceful” Women's March the next day. No mention of the rounding up of activists and journalists. No mention of the potential 10 year long prison sentence. Unless Trump’s personal brownshirts kick down the door of the Chicago Tribune, the arrests of journalists don't seem to register high on their lists of concerns.

Same for CNN, which has also warned of “threats to press freedom” under Trump but didn’t bother to mention journalists were involved in the mass arrests in their write up. Slate, which spent considerable time pondering what first amendment violations would look like under Trump, similarly ignored actual arrests of journalists under Trump–instead focusing only on the sanctioned, ideologically neat Women’s March the next day.

One possible reason could be the outlets these journalists worked for–freelance, nonprofit, foreign, and startup in nature–don’t typically solicit the kind of industry solidarity a Reuters or Washington Post or AP would. Another could be the blending of activism with reporting doesn’t sit well with the more traditional outlets. No matter the reason, most of the supposed protectors of press freedom that comprise our major media outlets have failed, quite starkly, the first test of press freedom in the Trump era.