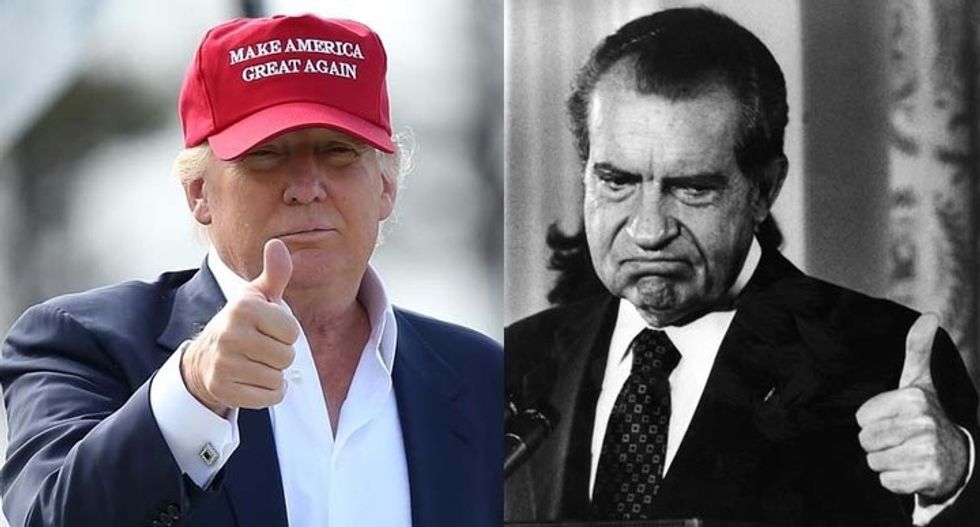 The move comes mere hours after it was reported that Yates told Justice Department lawyers not to defend Trump’s order, which the president signed on Friday to the chagrin of citizens and lawmakers on both sides of the aisle.

Yates was named deputy attorney general by former President Barack Obama and asked by the Trump administration to remain as acting head of the Justice Department by Trump pending Senate confirmation of Sen. Jeff Sessions (R-AL).

In a statement, the White House said Yates “betrayed” the Trump administration with her decision.

“Ms. Yates is an Obama Administration appointee who is weak on borders and very weak on illegal immigration,” the White House said.

The move prompted observers to rail against the “fascist” undertones of Trump’s decision, with many using the hashtag #MondayNightMassacre to describe the events. The hashtag—which was trending on Twitter Monday night—is a clear allusion to Richard Nixon’s Saturday Night Massacre, wherein Attorney General Elliot Richardson and Deputy Attorney General William Ruckelshaus resigned in protest after the former president demanded they fire a special prosecutor appointed to investigate the Watergate scandal.

Read some of the best reactions below:

If you're catching up (like me) Trump immediately fired Acting AG Yates for defying his racist #MuslimBan. This is not normal. #NoBanNoWall
— Evan Greer (@Evan Greer)1485830382.0

Acting AG (now former) Sally Yates is a lawyer of principle and courage. She should be celebrated for upholding the ideal that a lawyer 1/2
— Sherrilyn Ifill (@Sherrilyn Ifill)1485830214.0

This line from @WhiteHouse statement announcing firing of acting AG so Trumpian. Can't you hear him saying it in Ap… https://t.co/sY3d7e2c7Y
— Jacob Soboroff (@Jacob Soboroff)1485830138.0

Unsurprisingly, w a sexual predator in the WH, the folks standing up for constitutional govt in US are women. #WomensMarch and Sally Yates.
— Jasmin Mujanović (@Jasmin Mujanović)1485831251.0

Pres. Trump had an "Apprentice" flashback tonight. Told Sally Yates "You're Fired". She put her stuff in a box, they drove her off in Limo.
— Dr.Darrell Scott (@Dr.Darrell Scott)1485831034.0