'No proof whatsoever!': Carl Bernstein blows up as Kayleigh McEnany insists there was voter fraud 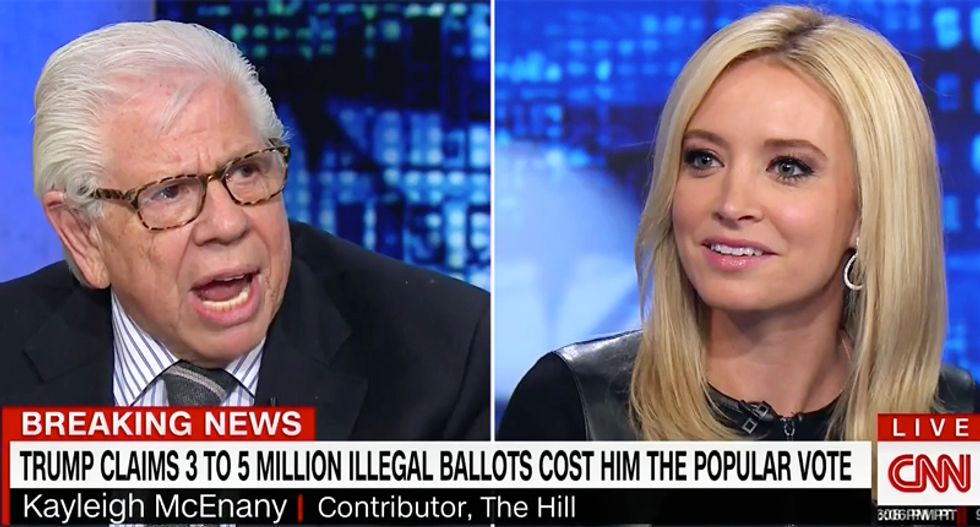 Famed Watergate reporter Carl Bernstein got into a shouting match with Trump advocate Kayleigh McEnany on Anderson Cooper 360  Monday night after she defended the president once again saying there was voter fraud during the 2016 election.

One day after the Trump administration described lying to the press as providing”alternative facts,” Trump told a meeting of Congressional leaders that millions of people voted illegally, costingg him the popular vote.

"You want to say to the president of the United States, grow up, Mr. President," Bernstein remarked. "You have been elected to be our president. You won the big numbers, unite the people and be the leader of all of the people of this country."

Host Cooper turned to McEnany asking her, "Is this much ado about nothing?"

"Yes, we all know he talks about poll numbers and victories and that he will question the popular vote," McEnany replied. "He does it, and the media goes into a tail spin, and meanwhile, the media and people watch--"

"Kayleigh, he is saying that fraud occurred on the most massive scale of an election in our history," Bernstein said as he cut her off. "It's not true, it's false."

"Well, you say it's false but there is no way to disprove it," McEnany shot back.

"It's been disproven, there's no proof whatsoever," Bernstein replied.

"There is no evidence to the contrary," McEnany told the frustrated Bernstein as she cited a "2008 peer-reviewed study" that had nothing to do with the 2016 election.

"There is considerable evidence to the contrary," a disgusted Bernstein said.