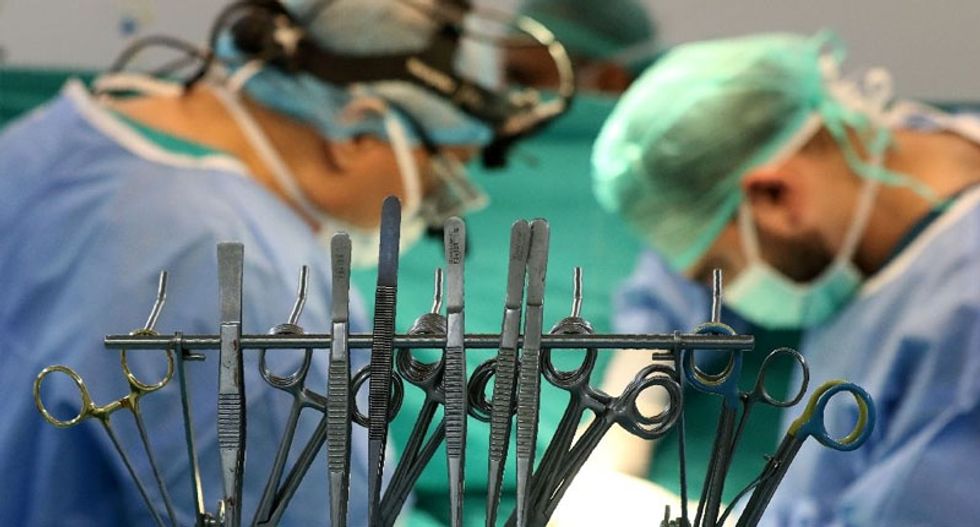 More than 95,000 women had a "labiaplasty" in 2015, according to the International Society of Aesthetic Plastic Surgery (ISAPS) (AFP Photo/)

A rush of women going under the knife for designer genitals has taken even plastic surgeons by surprise and divided medical professionals on the ethics and benefits of "labiaplasty".

In 2015, more than 95,000 women worldwide underwent the procedure, according to data from the International Society of Aesthetic Plastic Surgery (ISAPS).

Most often, labiaplasty involves trimming back the inner "lips" or labia minora flanking the vaginal opening, in a procedure that is also known as nymphoplasty.

It was the 19th-most popular surgical procedure in 2015, followed by "vaginal rejuvenation" -- usually tightening of the vaginal canal -- in 22nd place with just over 50,000 procedures.

"I trained in the '80s and if you had told me that you could imagine that this is happening know, I would think you were crazy," Renato Saltz, a plastic surgeon from Utah and ISAPS president told AFP.

In the United States alone, 2015 saw nearly 9,000 labiaplasties done -- a 16 percent increase from the previous year, according to the American Society for Aesthetic Plastic Surgery (ASAPS).

Older data is not available -- growth in the sector has been explosive in the past few years.

"Women have become much more concerned about the appearance of their genitalia," ASAPS board member and New York plastic surgeon Nolan Karp told AFP.

"How many nude women, before the internet, would a woman see in her lifetime?" he asked. "Not many, you know, very carefully looking at... genitals."

People today, he added, "understand what is pretty, what is normal, what looks good, what doesn't look good."

Much of what men and women see, however, does not in any way resemble the variety of shapes and sizes in which the female genitalia exist.

"It's very concerning," said Dorothy Shaw, former head of the Society of Obstetricians and Gynaecologists of Canada (SOGC), referring to the "standard" being pursued.

Designer vulva resemble those of a young girl.

"They have no hair and they're very flat, so you just see sort of a slit," Shaw explained.

In reality, "it's not as though the majority would look like a young girl. They don't."

A study published in 2005, found "far greater diversity" in genital shape and size than had ever been documented in scientific literature.

Given the variety, the authors said, it was "surprising that surgeons feel confident that surgery has the potential to achieve a 'normal' female genital appearance."

Yet, the fad has taken root like many others before it.

While women can suffer real discomfort from protruding inner labia chafing, many use it as an excuse, the experts said.

"We know that in about 40 percent of cases when women ask for a nymphoplasty to relieve pain... they lie," gynaecologist and plastic surgeon Nicolas Berreni told AFP.

"What they really want is the 'Barbie' look. On Barbie, you don't see the inner labia," he said on the sidelines of the IMCAS aesthetic congress in Paris.

It's not just a question of personal taste -- there are health risks too.

"I have colleagues who see women who have chronic vulvar pain" after labiaplasty and other cosmetic procedures, said Shaw, a retired gynaecologist.

"Any time you cut off a piece of tissue, there's a chance of bleeding, of infection and then subsequently of scarring," she explained.

"When you get scarring... you have a risk of catching nerve endings in that scar tissue which will then cause pain or discomfort going forward."

Shaw expressed particular concern about teenagers having labiaplasty before their physical development is complete.

"The inner lips in normal development become much more prominent (in adolescence), and as the outer lips grow, that changes," she explained.

"We need a way to help particularly young women understand that their bodies are still developing, they may not look like that in a few years, and that they may be harming themselves in a way that could be permanent."

The document stresses there is little evidence of surgery improving either sexual satisfaction or self image.

And it warns such procedures must "not contravene laws regarding female genital mutilation."

FGM involves the removal of the clitoris and labia, sometimes of very young girls against their will, in a misguided effort to reduce libido and keep women "chaste".

It is often performed in the name of religion, and is controversial in countries trying to save girls and women from genital mutilation -- some of the same countries where labiaplasty is becoming a fashion statement.