Security analyst shreds Trump's fear-mongering of immigrants: Attacks in US are 'overwhelming by Americans' 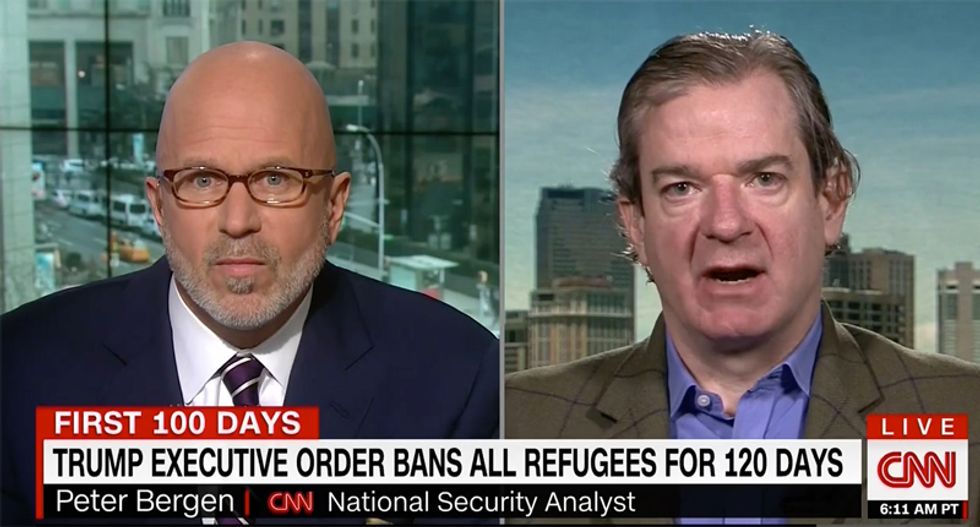 In a CNN discussion on President Donald Trump's signing an executive order banning immigrants from Syria from entering the country and ordering "extreme vetting" of applicants from Muslim countries, a security analyst noted that the majority of terrorism in the U.S. is committed by American citizens.

Appearing with CNN host Michael Smerconish, journalist and security analyst Peter Bergen broke down the numbers on domestic attacks and said that if Trump was serious about domestic attacks, he would restrict the easy availability to purchase guns.

"You went through 330 cases of terror prosecuted in the United States since September 11," the CNN host asked. "Who are the 330?"

"Well, they're overwhelmingly Americans," Bergen explained. "In fact, the sample size since we last spoke has grown to something like 375 cases since 9/11. Four out of five cases are American citizens, legal residents and very few are refugees, about a dozen. None of those cases involve acts of lethal terrorism or attempted lethal terrorism."

Turning to Trump's Friday night executive order, Bergen dismissed it a a distraction.

"This banning of refugees is kind of a red herring, by the way," Bergen continued. "We have accepted 10,000, 15,000 Syrian refugees as you know, Michael. None of them alleged to have been in any form of terrorist activity. They have to go through rigorous screening already, it is one of those 'sounds good' but as a practical matter is not making a difference to the terrorism issue which is overwhelmingly a domestic terrorism in the United States problem."

Turning to the risk of death at the hands of a terrorist, the CNN host noted that the odds of being killed in a terrorist attack on U.S. soil is 1 in 3.6 million.

Bergen then pointed out the more realistic threat faced by Americans.

"I am not sure if it is one in three billion or whatever, the odds are incredibly low," Bergen siad. "You're 3,000 more times likely to be killed by a fellow American and gun than you are by a jihadi terrorist. I mean, if you want to do something about terrorism in this country there's a very easy way to do it."

"Through the campaign, President Trump suggested he contemplated the idea that it makes no sense that people who are on the no-fly list allowed to buy semi-automatic weapons," Bergen continued. "A bill in Congress you recall after the Orlando attack addressed this, but it failed. That's a common sense measure that would make a difference."