'This is about white supremacists': Rula Jebreal erupts at Jonathan Turley for defending Trump's ban 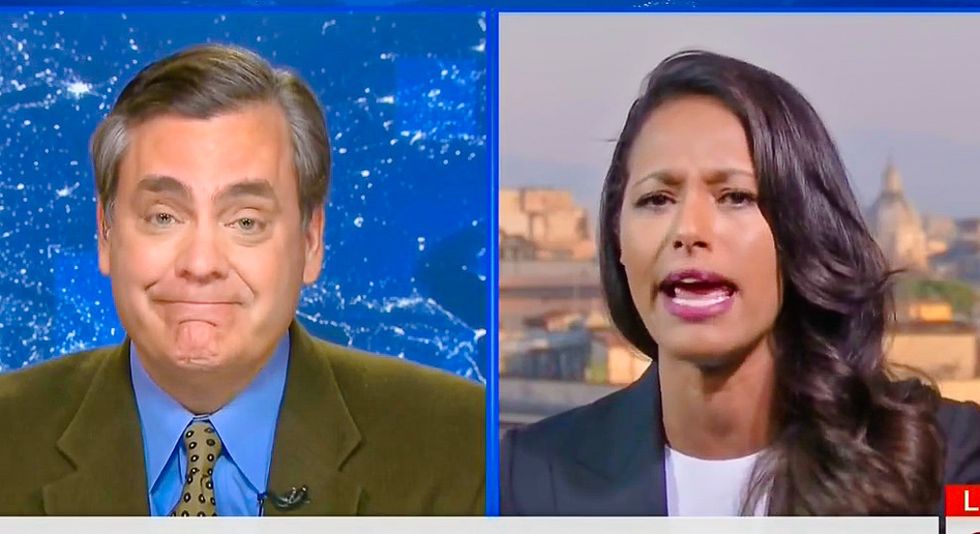 "The law does favor President Trump in this regard," Turley explained. "I don't like this order, I think it's a mistake. But that doesn't go into the legal analysis. The court has been extremely deferential to presidents on the border."

"I do not believe a federal court will view this as a Muslim ban," he predicted. "I don't think the court can, regardless of what the court may think of President Trump's motivations. The fact that other Muslim countries are not included is going to move that off the table."

Jebreal, however, called the executive order "an instrument of tyranny."

"This is government sanctioned religious persecution and it will not keep America safe," she insisted. "It's not about national security. This is about white supremacists. It's clear in the executive order the president signed, he mentioned 9/11 three times. However, none of the countries that were on that list had citizens who were involved in 9/11."

"He's using immigrants [and] refugees as a human shield to advance his -- I would say -- clash-of-civilizations white supremacist agenda," Jebreal continued. "When he talks about voter fraud, he's talking about people like you, Fareed, and other brown people who arrived to this country legally."

"I would challenge anybody who would tell me that this is about national security."

Turley pointed out that he did not approve of Trump's actions and encouraged Jebreal to put her "passions aside."

"There's plenty of reasons to object to this order on policy and humanitarian grounds," Turley said. "It's not necessary to pretend it's something it's not or to suggest that our host [Fareed Zakaria] or the earlier speaker would not be allowed in the country. I see no evidence to suggest that would be true."

"I think you want to oppose this, you need to oppose it for what it is," the law professor advised. "And what it is, is not currently a Muslim ban. That's not going to happen in a federal court, that's going to be how the court's going to frame it. I don't see how a court can do that."

Turley also argued that Trump's executive order could not be described as "tyranny" because the legislative and judicial branches could push back.

"I don't believe that 47 percent of the United States are white supremacists," Turley opined. "Is we're going to reach any type of resolution, we have got to stop calling each other names and [pretending] that we worse than we are. There are people on the other side that support this that are not white supremacists."

"The way to convince them is not to suggest that this is a Muslim ban or that they're white supremacists," he said.

"Or even defend it or justify it," Jebreal continued. "You are betraying American values. This is not about passion, this is about facts."

"I'm not making your point," Jebreal replied. "Read my lips and try to hear what I'm saying... You're really trying to tell me and the audience that this is not about religious political persecution? Give me a break."