'This is not about religion': Trump statement defends travel bans as criticism intensifies 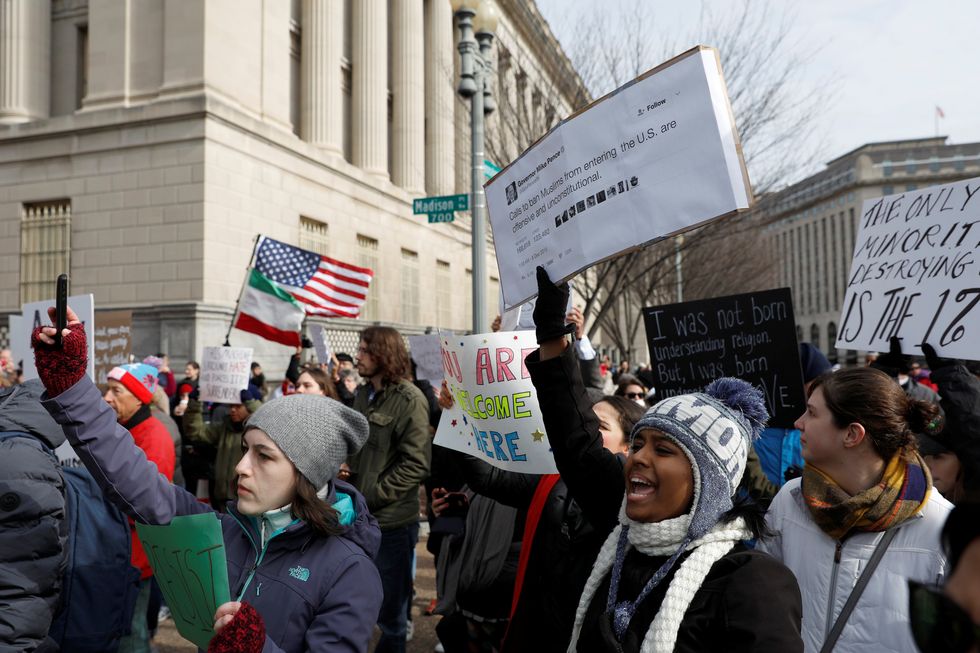 President Donald Trump on Sunday defended his move to ban entry of refugees and people from seven Muslim-majority nations and said the United States would resume issuing visas for all countries in the next 90 days as he faced rising criticism at home and abroad and new protests in U.S. cities.

Trump signed the directive on Friday, but the policy appeared to be evolving on the fly. Democrats and a growing number of Republicans assailed the move amid court challenges and tumult at U.S. airports. Trump's critics have said his action violated U.S. law and the U.S. Constitution.

Outside the White House, where some viewing stands from Trump's Jan. 20 inaugural parade still stood, several thousand protesters denounced him, carrying signs such as "Deport Trump" and "Fear is a terrible thing for a nation's soul." Tens of thousands turned out at protests in cities and airports in New York, Los Angeles, Boston, Houston, Dallas and elsewhere.

Trump, a Republican, on Friday put a four-month hold on allowing refugees into the country, an indefinite ban on refugees from Syria and a three-month bar on citizens from Iran, Iraq, Libya, Somalia, Sudan, Syria and Yemen.

Border and customs officials struggled to put Trump's directive into practice. Confusion persisted over details of implementation, in particular for the people who hold so-called green cards as lawful U.S. residents.

Senator Bob Corker, the Republican chairman of the U.S. Senate Foreign Relations committee and a Trump supporter, said the president's order had been poorly implemented, particularly for green card holders.

"The administration should immediately make appropriate revisions, and it is my hope that following a thorough review and implementation of security enhancements that many of these programs will be improved and reinstated," Corker said.

"To be clear, this is not a Muslim ban, as the media is falsely reporting," Trump said in a statement on Sunday. "This is not about religion - this is about terror and keeping our country safe. There are over 40 different countries worldwide that are majority Muslim that are not affected by this order."

He added: "We will again be issuing visas to all countries once we are sure we have reviewed and implemented the most secure policies over the next 90 days."

White House Chief of Staff Reince Priebus said people from the seven countries who hold green cards would not be blocked from returning to the United States, as some had been following the directive.

"As far as green card holders moving forward, it doesn't affect them," Priebus said on the NBC program "Meet the Press."

Priebus added that these green card holders would be subjected to "more questioning" by U.S. Customs and Border Patrol agents when they try to re-enter the United States "until a better program is put in place over the next several months."

MORE NATIONS MAY BE ADDED

Priebus also said Customs and Border Patrol agents would have "discretionary authority" when they encounter someone arriving who they suspect "is up to no good" from certain nations. Asked why Saudi Arabia, Afghanistan, Pakistan and Egypt were not included on Trump's list, Priebus said that "perhaps other countries needed to be added to an executive order going forward."

"Ultimately, we fear this executive order will become a self-inflicted wound in the fight against terrorism," they said, adding the United States should not stop green card holders "from returning to the country they call home."

"This executive order sends a signal, intended or not, that America does not want Muslims coming into our country," the added.

Trump blasted the two senators in a Twitter statement, calling them "sadly weak on immigration."

In a another Twitter message earlier on Sunday, Trump said the United States needed "strong borders and extreme vetting, NOW."

"Christians in the Middle-East have been executed in large numbers. We cannot allow this horror to continue!" added Trump, who successfully tapped Americans' fear of attacks during his election campaign and has presented the policy as a way to protect the country from the threat of Islamist militants.

Trump's tweet did not mention that many more Muslims have been killed in the bloody Syrian civil war and other violence in the targeted countries.

Chuck Schumer, the top Democrat in the Republican-led U.S. Senate, seized on the mixed messages from Trump's administration after Priebus' comments.

"We need clarification. But it shows you, above the bad nature, the horrible nature of these (orders), the incompetence of this administration," Schumer told a news conference. "One hand doesn't know what the other is doing."

A senior administration official said green card holders would be subject to a rescreening but it had not been determined where and how those screenings would be carried out. Specific guidelines were being put together, the official said, adding:

"I think banning refugees, banning immigrants, banning religions like Islam or any other religion, is un-American," said Will Turner, 42, draped in a U.S. flag among a crowd of several thousand people in front of the White House chanting: "No hate, no fear, refugees are welcome here."

Condemnation of the order poured in from abroad, including from traditional allies of the United States.

In Germany - which has taken in large numbers of people fleeing the Syrian civil war - Chancellor Angela Merkel said the global fight against terrorism was no excuse for the measures and "does not justify putting people of a specific background or faith under general suspicion," her spokesman said on Sunday.

"Our country has benefited tremendously from a history of welcoming people from all cultures and backgrounds. This is a hallmark of free and open societies," Brian Hooks said in a statement.

Civil rights and some religious groups, activists and Democratic politicians have promised to fight Trump's order and Schumer said his party would introduce legislation to overturn it.

Republicans control both the House of Representatives and the Senate, but several senior Republicans voiced concern.

Priebus said that of 325,000 people who arrived from foreign countries on Saturday, 109 people were detained for further questioning, and most of them were moved out, with just a "couple dozen more that remain" detained.

One of those detained was a Sudanese man with a green card who was released around noon on Sunday after being held by federal authorities at JFK airport in New York, the man's son said.

Mohamed Suliman, 37, a British citizen, told Reuters he had traveled from Britain to Sudan, and accompanied the older man back to the United States. He said he was detained for about an hour upon arrival, but his father, Yassin Abdelrahm, 76, was held for 16 hours.

A federal judge in Brooklyn, New York, granted a reprieve late on Saturday evening. The American Civil Liberties Union, representing two Iraqis caught by the order as they flew into the country, successfully argued for a stay that prevented travelers denied entry to the United States from being deported.

Federal judges in three states followed that in orders late on Saturday or early on Sunday, barring authorities from deporting affected travelers. Separately, Democratic attorneys general from California and New York were among states discussing whether to legally challenge the order, according to officials.

Immigration and civil rights attorneys and advocates said officials at several airports were not complying with federal court orders, including the judge’s stay.