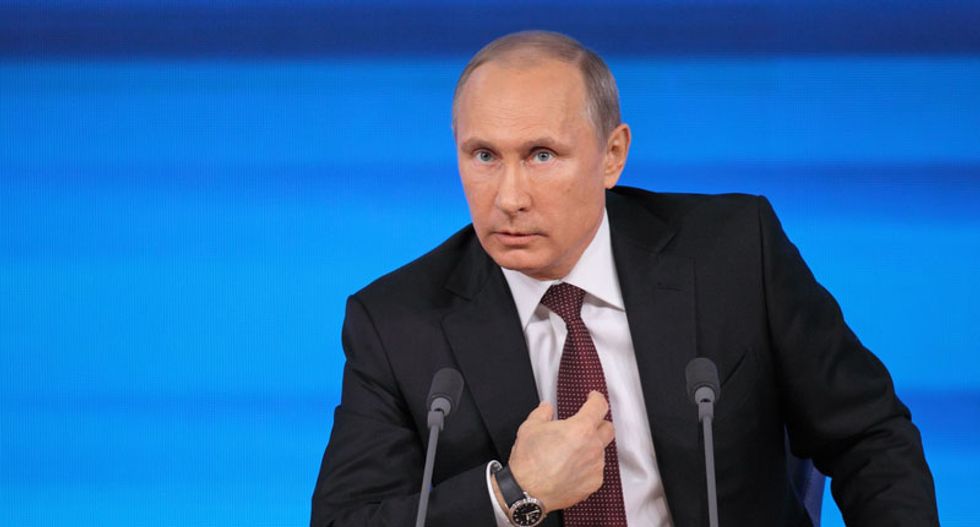 U.S. President Donald Trump said on Friday he is only in the early stages of considering whether to lift U.S. sanctions on Russia, as British Prime Minister Theresa May, other foreign officials and U.S. lawmakers cautioned that such a move would be premature.

With Trump expected to speak by phone on Saturday with Russian President Vladimir Putin for the first time since taking power a week ago, speculation has been rife that he is close to lifting sanctions imposed by then-President Barack Obama over Moscow's annexation of Ukraine's Crimea Peninsula in 2014.

Such a move would likely cause consternation among European allies as well as many in the U.S. Congress who are also troubled by Russia's intervention in the Syrian civil war and by U.S. intelligence agencies' finding that Moscow meddled in the U.S. election campaign.

"As far as the sanctions, (it is) very early to be talking about that," Trump said, while insisting that he wanted to follow through on his campaign pledge to pursue better relations with Russia.

His caution on the Russian sanctions came in response to a question at a joint news conference at the White House with British Prime Minister Theresa May, the first foreign leader to visit the president since his inauguration.

May made clear Britain wants to continue sanctions until Putin carries out the requirements in a ceasefire agreement arranged in Minsk, Belarus in 2014. This view is shared by European allies who fear Putin could become more expansionist if he feels Trump will not intervene.

"We believe the sanctions should continue until we see the Minsk agreement fully implemented. And we’ve been continuing to argue that inside the European Union," May said.

The boisterous Trump and reserved May took pains to demonstrate a readiness to maintain the "special relationship" between the United States and Britain, something that is particularly important for May as she steers Britain out of the European Union.

They posed for photos before a bust of Winston Churchill in the Oval Office and Trump accepted an invitation from Queen Elizabeth to visit Britain later this year.

The two leaders held hands briefly as they walked down the White House colonnade to their news conference in the East Room. Later, they lunched on beef shortribs in the State Dining Room.

At the news conference, Trump showed flashes of the pugnacious willingness to dispense with formality that helped him win the Nov. 8 election, registering his displeasure when a British reporter asked him what he had to say to those who are "worried about you becoming the leader of the free world."

"This was your choice of a question?" Trump said with a half smile. Then, nodding toward May as laughter erupted, he added: "There goes that relationship."

On ties with Moscow, Trump has long bucked establishment Washington thinking by voicing a belief that, as he said on Friday, it would be a "tremendous asset" to have a positive relationship with Russia.

A long-time Putin critic, U.S. Senator John McCain, who like Trump is a Republican, urged Trump not to lift the sanctions, which he called "a reckless course."

"If he does not, I will work with my colleagues to codify sanctions against Russia into law," said McCain, a long-time Putin critic.

House of Representatives Speaker Paul Ryan, the top U.S. elected Republican, told Politico of the sanctions that "I think they should stay."

Former NATO chief Anders Fogh Rasmussen, now an adviser to Ukrainian President Petro Poroshenko, urged caution against reversing sanctions without winning concessions from Moscow, saying that, "easing sanctions will only embolden Russia’s aggression in the region, putting the security interests of Ukraine and the United States in jeopardy."

The White House encounter between Trump and May was heavily scrutinized for signs on how the relationship would develop between the leaders of two key members of the NATO alliance, who are markedly different in style but who both owe their rise to power to a tide of anti-establishment feeling in their countries.

“I’m not as brash as you might think,” Trump said at the news conference. “I’m a people person and I think you are too, Theresa. I think we're going to have a fantastic relationship."

Trump, a wealthy real estate developer and former reality TV star, had never held public office when he was elected in November. May stepped in to lead Britain after the June referendum Brexit vote to leave the EU that prompted her Conservative predecessor, David Cameron, to resign.

It was notable that Trump did not give much in the way of vocal support for NATO, which he has previously declared obsolete. It was left up to May to issue support for NATO in her opening remarks at their news conference, and to encourage Trump's backing.“On defense and security cooperation, we are united in our recognition of NATO as the bulwark of our collective defense,” she said.

"Today we’ve reaffirmed our unshakeable commitment to this alliance – Mr. President I think you confirmed that you are 100 percent behind NATO."