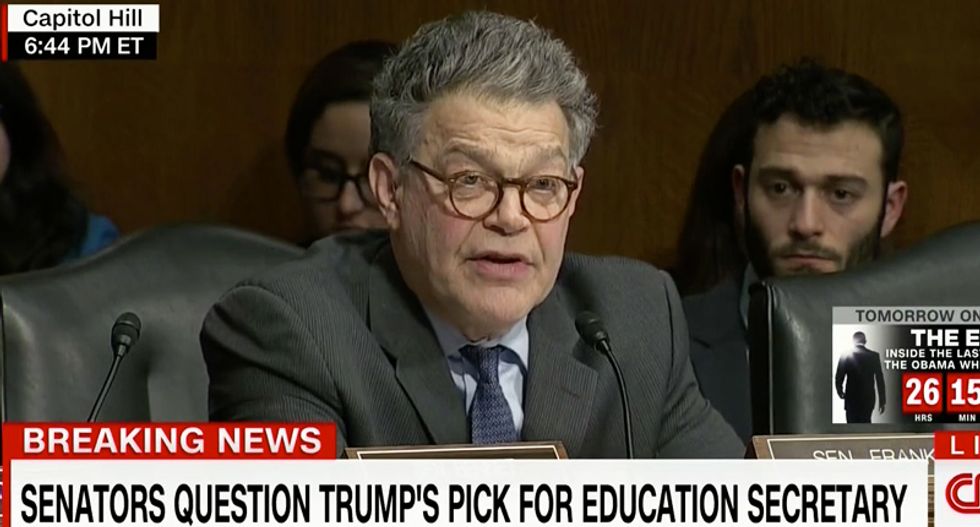 Minnesota Sen. Al Franken (D) left no doubt which way he will be voting for President-elect Donald Trump's choice to head the Department of Education, hammering appointee Betsy DeVos for her and her family's funding on anti-LGBTQ groups and causes.

Noting the Michigan billionaire has no background in the educational field outside of attacking teachers unions, Franken directed his most caustic objections at the way she and her family have attacked the LGBTQ community.

"Mrs. DeVos, your family has a long history of supporting anti-LGBT causes including donating millions of dollars to groups that push conversion therapy, the practice of trying to change someone's sexual orientation or gender identity," Franken began. "For example, you and your family have given over $10 million to Focus On the Family, an organization that currently states on its website that, 'homosexual strugglers can and do change their sexual behavior and identity.'"

"Mrs. DeVos, conversion therapy has been widely discredited and rejected for decades by every mainstream medical and mental health organization as neither medically nor ethically appropriate," the senator continued. "It has been shown to lead to depression, anxiety, drug use, homelessness, and suicide, particularly in LGBT youth. In fact, many of the leaders and founders of conversion therapy, including both religious ministries and mental health professionals, have not only publicly renounced it but have issued formal apologies for their work and how harmful it has been to the individuals involved. Mr. Chairman, I would ask that this be included in the record."

"Mrs. DeVos, do you still believe in conversion therapy?" he pressed.

"Senator Franken, I've never believed in that," DeVos said defensively. "First of all, let me say I fully embrace equality and I believe in the innate value of every single human being and that all students, no matter their age, should be able to attend a school and feel safe and be free of discrimination. So let's start there and let me just say that your characterization of our contributions I don't think accurately reflects those of my family. I would hope you wouldn't include other family members beyond my core family."

"Well, in terms of throwing numbers around, you said that student debt has increased by 1,000 percent," Franken stated.

"That's just not so," Franken lectured her. "It's increased 118 percent in the past 8 years. So, I'm just asking if you're challenging my figures, I would ask that you get your figures straight about education policy and that's why we want more questions. Because we want to know if this person that we are entrusting to be the secretary of education, if she has the breadth and depth of knowledge that we would expect from someone who has that important job."

Watch the video below vis CNN: