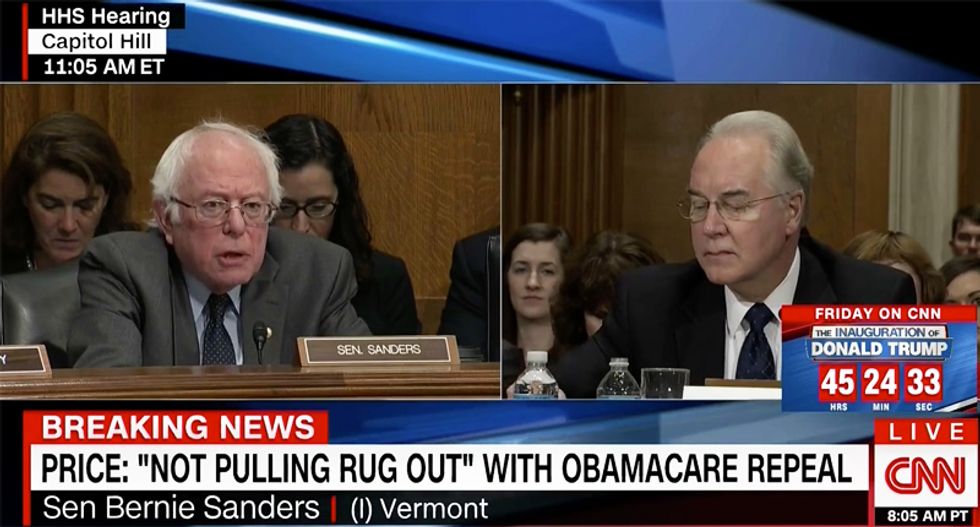 The Vermont senator went straight to the heart of matters, pressing Price on the future of Medicaid and Medicare by reminding the Georgia doctor what President-elect Trump said on the campaign trail.

"Let me begin by saying all of us know that we have come through a very unusual election process," Sanders began. "President-elect Trump received almost 3 million votes less than Secretary Clinton, but he won the Electoral College. He's going to be inaugurated this week. He won a number of states by rather slim margins."

"During the course of his campaign, Mr. Trump said over and over again that he would not cut Social Security, not cut Medicare, not cut Medicaid," Sanders continued. "Let me read some quotes. On May 7th, 2015, Mr. Trump tweeted, 'I was the first and only potential GOP candidate to state there will be no cuts to Social Security, Medicare, and Medicaid.' On April 18th, 2015, he said, quote, 'Every Republican wants to do a big number on Social Security, they want to do it on Medicare, they want to do it on Medicaid, and we can't do that, and it's not fair to the people who have been paying in for years and now all of a sudden they want it to be cut,' end of quote. August 10th of 2015 Mr. Trump said, quote, 'I will say Medicare, Medicaid, and Social Security will be saved without cuts. We have to do it, people have been paying in for years and now many of these candidates want to cut it,' end quote."

"Point being," Sanders lectured Price, "This is not something he said in passing. I think it is likely he won the election because millions of working class people and senior citizens heard him say he was not going to cut Social Security, Medicare, and Medicaid. Congressman Price, a very simple question:  Is the president-elect, Mr. Trump, going to keep his word to the American people and not cut Social Security, Medicare, and Medicaid? Or did he lie to the American people?"

"I haven't had extensive discussions with him about the comments he made," a subdued Price replied. "But I have no reason to believe he's changed his position."