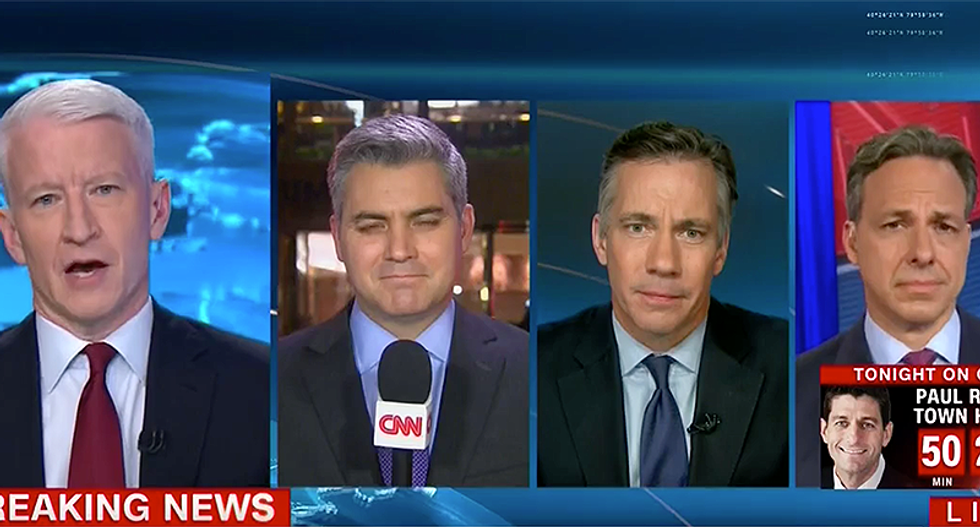 "Jim Acosta, you tried to ask a question at the press conference to president-elect Trump," Cooper said. "He refused to take questions, saying you're from 'fake news.' What did Sean Spicer say to you after that?"

"Well, he came up to me and said that what I did was crossing the line and was inappropriate," Acosta said. "We should repeat that during that news conference when I was trying to ask that question, Spicer threatened to throw me out of the press conference if I kept persisting. But speaking of Sean Spicer, we should report that on a conference call this morning, he was asked whether Donald Trump was going to sue over these stories for libel and Sean Spicer told reporters that the president-elect would like to move on."

Acosta said that the one thing that is worse than "fake news" is "the denial of real news." What could be worse than that is watching Conway being "not in command of the facts."

"But I will tell you that this has been a pattern for the Trump campaign and now the Trump transition, where they don't like the news that's being reported and they go after the messenger and I think that's just going to continue," Acosta continued.

Sciutto noted that it is extremely rare for someone like James Clapper to put out a statement calling out a president-elect for lying about what he was or was not briefed on. He noted that he, Tapper and even Carl Bernstein, who all worked their own sources in the intelligence community and were able to confirm the briefing occurred.

He said that of all of the things that Conway and Trump have said over the last few days he is the most concerned about what the president-elect did to Acosta during the press conference.

"He accused our network, our reporters of spreading fake news when in fact we were right," Sciutto said. "It matters because this is a democracy, an open society, and we rely on our public officials, our leaders giving us an accurate presentation of the facts. An inaccurate presentation of and the president went out with the facts which was then contradicted in public by two people in the room, the director of national intelligence and the vice president."