What will you do if it's true?: Franken puts Sessions on the spot over Trump-Russia allegations 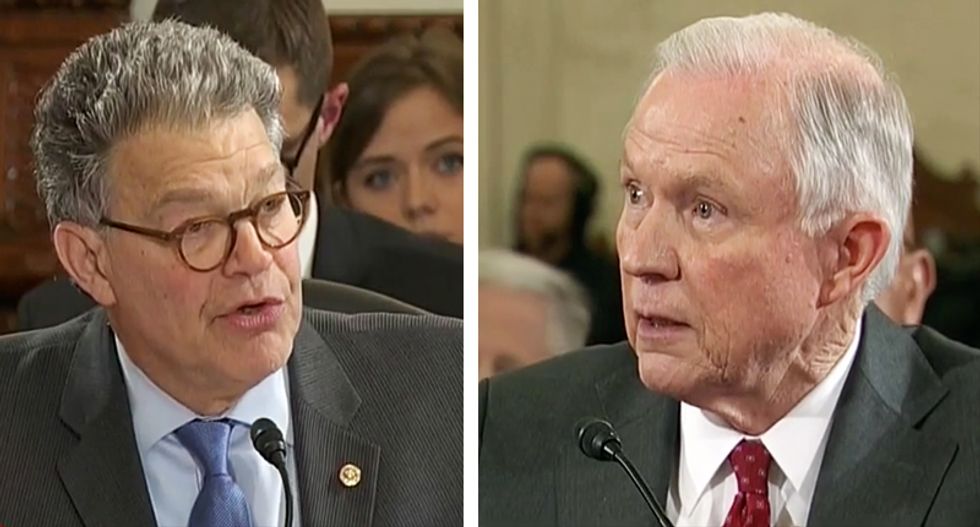 In part of the questioning for Sen. Jeff Sessions (R-AL), Sen. Al Franken (D-MN) brought up the recent bombshell report from a former British intelligence officer that revealed President-elect Donald Trump is being compromised by the Russians.

Franken brought up the news, citing

"These documents also allegedly stated, quote, there was a continuing exchange of information during the campaign between Trump surrogates and intermediaries from the Russian government," Franken said. "Now, again, I'm telling you this as it's coming out, so, you know. But if it's true, it's obviously extremely serious and if there is any evidence that anyone affiliated with the trump campaign communicated with the Russian government in the course of this campaign, what will you do?"

"Without divulging sensitive information, do you know about this or know what compromising personal and financial information the Russians claim to have?" Franken continued.

"Senator Franken, allegations get made about candidates all the time and they've been made about President-elect Trump lots of times," Sessions said, dismissing the report. "Most of them, virtually all of them, have been proven to be exaggerated or untrue. I would just say to you that I have no information about this matter. I have not been in on the classified briefings and I'm not a member of the intelligence committee."

"Last week, Julian Assange, the founder of WikiLeaks, claimed that the Russian government was not the source of the hacked e-mails WikiLeaks published during the -- that they published during the campaign. Now, Assange did not identify his source nor did he say whether his source worked with or received information from the Russians, but, again, American intelligence agencies have included the Russian government directed the hacking operation."

Franken noted that immediately Trump tweeted out that Julian Assange said a 14-year-old could have hacked John Podesta's email. "Does it concern you that our future commander in chief is so much more willing to accept what Julian Assange says, than any of the conclusions of our intelligence agencies? And why do you think President Trump finds Assange trustworthy?"

Sessions still refused to answer, saying that he hasn't spoken to the president-elect about the information.

"Back in 2010, back when Wikileaks was publishing stolen American diplomatic cables and military secrets, you voiced concern about the Obama administration's response. You said that WikiLeaks publishing sensitive documents should be, 'Pursued with the greatest intensity.' You said, 'The president from on down should be crystal clear on this and I haven't seen that.'"

Franken said that in the past WikiLeaks has been denounced by the right and that now Trump is in an awkward predicament.

"President-elect Trump, by contrast, said, 'WikiLeaks, I love WikiLeaks.' Do you believe that by holding up Julian Assange who traffics in leaked and stolen documents, often classified documents as a legitimate source of information that President-elect Trump is glorifying people who leak sensitive documents?"

Sessions said only that if Assange violated American laws or participated in violating the law that he should be subject to prosecution.

"Well, we know that in regard to what he did in 2010 and yet the President-elect said, 'WikiLeaks, I love WikiLeaks.' Doesn't it seem like, perhaps, if you weren't sitting before us today as an attorney general nominee and if President Obama was publicly embracing Julian Assange that perhaps you might take a more critical view?"