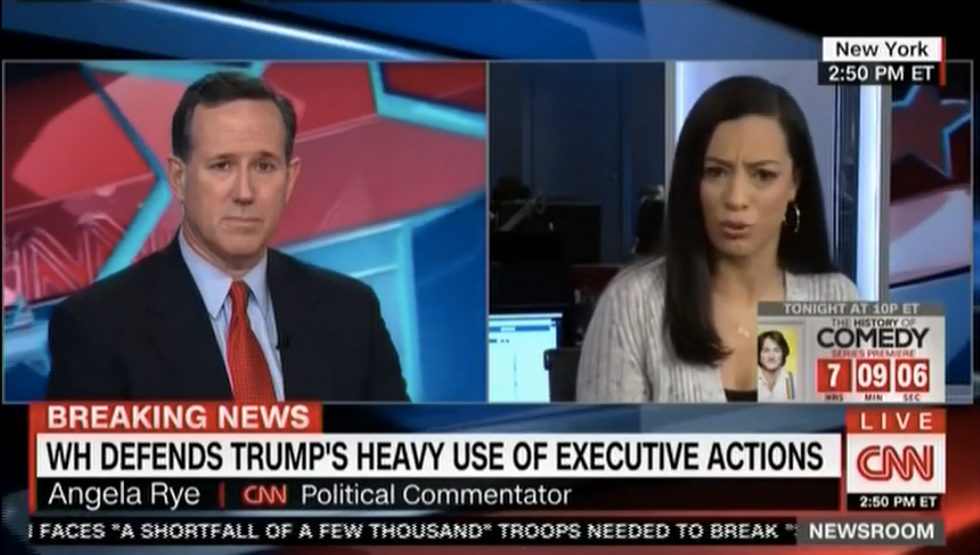 During a discussion of the attack on a Canadian mosque, Santorum tried to excuse Trump's habit of tweeting before he knows the whole story by saying, "It should not be a surprise that presidents or anybody is not going to tweet out things that don't necessarily fit with the narrative that the administration is trying to put forward."

He continued, "This previous president, when there were attacks by anybody who shot someone black, the president would be out there with some sort of statement to talk about it. If it was the reverse, you never heard anything. So, there is a narrative that the White House tries to drive on issues that they care about."

Anchor Wolf Blitzer called in Rye, who was appearing by satellite.

Rye said that with his new executive orders, Trump is rolling back years of work by the Obama administration in healing relationships between law enforcement personnel and communities of color. She then turned her attention to Santorum.

"I think that it's horrible to tarnish Barack Obama's legacy in saying he did not comment on black on white crime or when there were shootings of officers or what have you," Rye said. "That is simply not true. I do think that at this point this president has an obligation to say something. We are just a month or so into this new year and there have already been a hundred-plus people who have been killed by law enforcement."

"And today they doubled down with law enforcement and said, 'We are standing with you and we're going to protect your lives,'" she said. "But they haven't said anything about the lives of the folks who've been killed."

In fact, Pres. Obama spoke out on numerous occasions about violence against people of all races. In the waning days of his presidency, he spoke out against a brutal attack on a disabled white Chicago teen by a group of black youths.

“I think the overall trajectory of race relations in this country is actually very positive. It doesn’t mean that all racial problems have gone away. It means that we have the capacity to get better," Obama said in January.