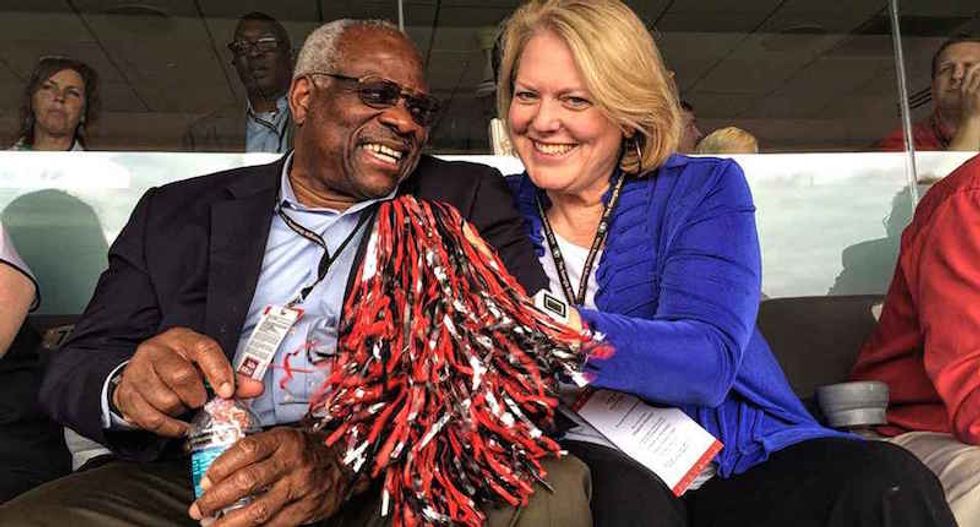 The wife of a U.S. Supreme Court Justice is helping to organize against grassroots resistance to President Donald Trump and his policies -- especially the travel ban.

The Daily Beast obtained an email from Ginny Thomas, the wife of Justice Clarence Thomas, to a conservative listserv group asking how she could help promote the president's controversial policies.

“What is the best way to, with minimal costs, set up a daily text capacity for a ground up-grassroots army for pro-Trump daily action items to push back against the left’s resistance efforts who are trying to make America ungovernable?” Thomas wrote. “I see the left has Daily Action @YourDailyAction and their Facebook likes are up to 61K."

“There are some grassroots activists, who seem beyond the Republican party or the conservative movement, who wish to join the fray on social media for Trump and link shields and build momentum,” Thomas wrote. “I met with a house load of them yesterday and we want a daily textable tool to start… Suggestions?”

Neither Thomas or her husband returned requests for comment.

Ginni Thomas, who has drawn attention in the past for her Tea Party activism, also complained about former acting attorney general Sally Yates.

She described Yates, in a piece for The Daily Caller, as part of a “subversive alt-government” that was trying to undermine the president and make the nation "ungovernable."

Yates angered the Trump administration and conservatives when she refused to defend the president's ban on travelers from certain Muslim nations.

That executive order could end up before the Supreme Court, and her comments about Yates could force her husband to recuse himself from hearing the case.

“It’s pretty egregious," said Heidi Li Feldman, a professor at Georgetown Law School and expert on legal ethics. “It’s pretty clear that it’s quite partisan and in context, given the date of the email and that the tool is meant to rebut activity on the left —what has the left been really active on? The executive orders. So minimally, I would say the author of the email is thinking of that executive action. It’s so specific, it’s so narrowly tailored."

“I was taken aback,” she added.

Thomas previously recused himself from hearing United States v. Virginia because his son was enrolled at the Virginia Military Institute, which was the subject of the case, at the time.

He did not recuse himself from hearing a case on the Affordable Care Act, however, despite his wife's public opposition to the law.