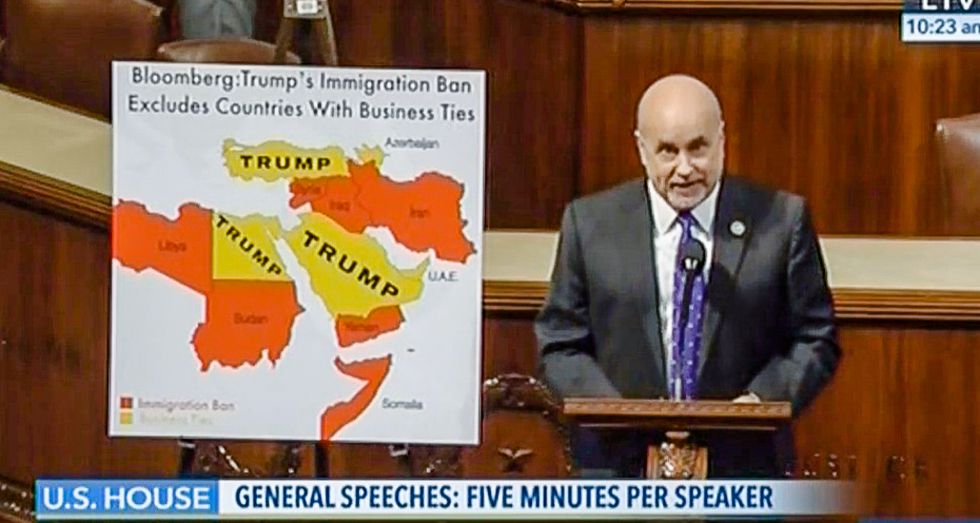 Rep. Mark Pocan (D-WI) became one of the first lawmakers to speak on the House floor about impeaching President Donald Trump on Thursday.

During time allotted for general speeches, Pocan presented a map of the seven majority-Muslim countries that had been the focus of Trump's recent travel ban.

The Wisconsin Democrat pointed out that the president had excluded all countries in the Middle East where he had business interests.

"These countries were excluded from the executive order despite being home to many of the terrorists who carried out 9/11," Pocan explained. "I'm not saying we should ban people from these countries. I firmly oppose any ban based on nationality or religion. But it is unacceptable that business interests have played potentially a role in such a destructive policy, a policy that also makes our country less safe in the long run."

Pocan blasted the White House for using "alternative facts" in its claim that only 109 people were impacted by the travel ban.

"It's time for the president to stop defending his divisive and unconstitutional executive order and start being transparent about his business interests," the congressman continued. "Every president in the modern era has released tax records to ensure the American people that their actions will not be impacted by financial holdings."

Pocan argued that Trump was potentially "in direct violation of the Emoluments Clause of the Constitution on day one."

"Mr. President, it's time for you to fix this," he demanded. "One, divest your business holding immediately to remove any suggestion of conflicts in your decision making. Two, show us your tax returns so financial interests are transparent to the American people. And three, get rid of your unconstitutional executive order, which will make us less safe and only serve to embolden our enemies."

"Short of that, we'll have to take other actions, including legislative directives, resolutions of disapproval and even explore the power of impeachment," Pocan concluded, earning him a rebuke from the Speaker's chair.