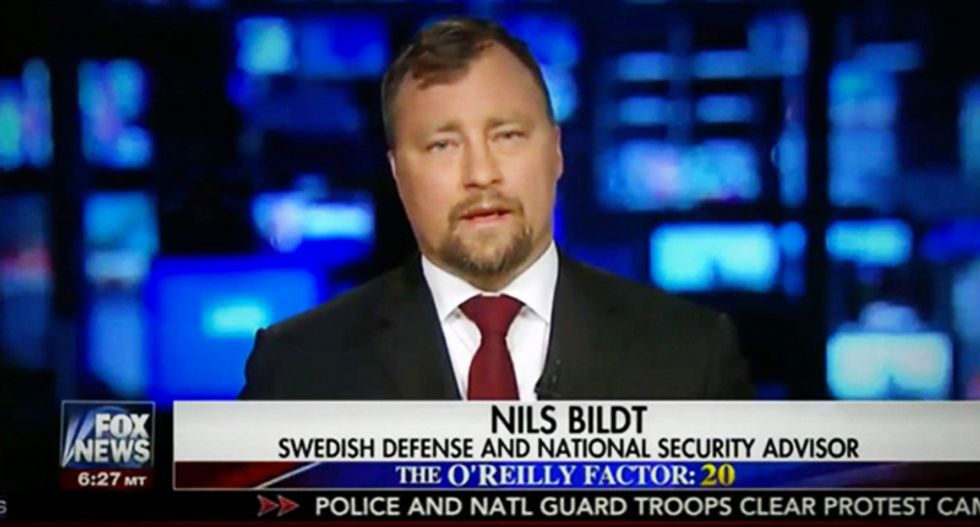 On a Thursday night segment of The O'Reilly Factor, the Fox News Network presented an expert on security measures in Sweden, describing him as a “Swedish Defense and National Security Advisor,” despite the fact that the Swedish Defense Ministry has no knowledge of who he is.

Host Bill O'Reilly spoke with Nils Bildt, in an effort to back up Trump administration claims that Sweden is under siege from immigrants -- a claim the Swedish government disputes.

Following Bildt's appearance with O'Reilly, questions were raised in Sweden about his relationship with the government, with Dagens Nyhater reporting that he is a mystery to Swedish officials.

According to the report, Bildt is not only not known as a expert on Swedish violence, but was reportedly convicted of obstruction of justice and assault on a US  law enforcement official in 2014 and subsequently sentenced to one year in prison.

Asked about his conviction by DN, Bildt responded with an email saying he was unaware of the allegations against him and refused further comment

In a later email, he blamed Fox News for the misleading description as a defense and security adviser, writing, ”I appeared on Bill O'Reillys' show on Fox News. The title was chosen by Fox News's editor – I had no personal control over what title they chose. I am an independent analyst based in the USA."

Asked about Bildt's expertise in Swedish security matters, Robert Egnell, a professor at Swedish Defence University told the Washington Post that he was mildly acquainted with Bildt who has reportedly been out of the country for years.

“He is in not in any way a known quantity in Sweden and has never been part of the Swedish debate,” Egnell explained by email “He has not lived in Sweden for a very long time and no one within the Swedish security community (which is not a very big pond) seems to know him.”

However, a viewing of the O'Reilly clip (see below) shows the host identified Bildt using the title and his guest did not correct him.