Garry Kasparov explains how to stop Trump: Make him look like a 'loser' until GOP turns on him 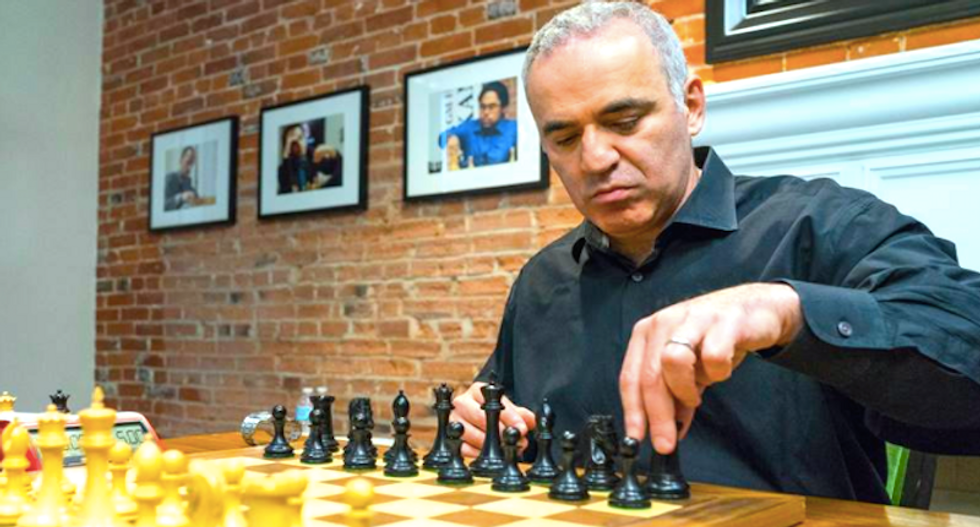 Garry Kasparov, the former World Chess Champion and a fierce critic of Vladimir Putin, explained how to resist President Donald Trump's alarming embrace of the Russian president and his tyranny.

"Dealing with propaganda and misinformation campaigns is a new fight for most Americans, but it’s familiar ground for me and other Russians," Kasparov told Vox. "You can see dystopian novels climbing the best-seller lists in the U.S. because people are trying to educate themselves, and that’s where I’m trying to help."

Kasparov told the website Trump is "entirely unqualified" to serve as president, and his "autocratic instincts" combined with "dangerous advisors" and possibly the influence of a "malign foreign interest" posed dangerous threats to U.S. democratic institutions and world security.

"Modern dictatorships have become far more sophisticated still in how to achieve their ends," Kasparov said. "They learned that by constant bombardment, your senses become overwhelmed. You start to doubt, to shrug your shoulders, to tune out, and that makes you vulnerable. Instead of pushing one lie, one fake, they can push a dozen, or a hundred, and that’s pretty good odds against one lonely truth. They win when you say: 'Who can be sure what really happened?'”

Kasparov drew from his chess background to explain a strategy for resisting Trump.

"One lesson is to not to play desperately if your position is worse but still reasonable," he told Vox. "Lashing out wildly in an inferior position usually only hastens defeat. Meanwhile, solid, stubborn defense can demoralize the attacker, make him lose confidence. When that happens, the tables can turn. Keep fighting, stay steady, keep morale high — and public protests are good for all of these things."

It's important that those protests remain peaceful so Trump cannot frighten away moderates with lies about violent radicalism, Kasparov said, and he urged a strong defense of democratic institutions.

"The courts are important, but things won’t really change unless enough Republicans start to see Trump as a liability to their fundraising and reelection chances," Kasparov told the website. "That could be quite soon if he can’t fulfill his many campaign promises."

Trump is most vulnerable in his desperate need for validation and approval, Kasparov said -- and he urged opponents to attack him there.

"Making him look like a loser is crucial," Kasparov told Vox. "Either the GOP will turn on him or he will be chastened and more likely to compromise. If a demagogue succeeds in claiming credit for wins and scapegoating his enemies for losses, he’s very hard to stop."