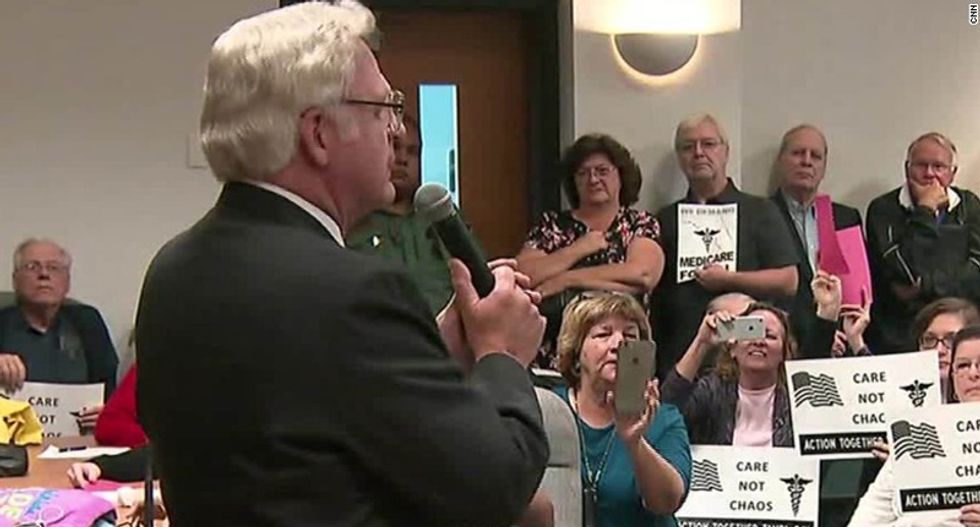 A previously obscure GOP official from Florida who became a national celebrity for invoking "death panels" at a town hall on the Affordable Care Act -- and then calling voters "children" when they protested -- has an extensive history of pushing conspiracy theories and racist jokes on social media, the Washington Post is reporting.

Bill Akins, secretary of the Republican executive committee in Florida's Pasco County, made a splash on national TV when CNN cameras caught him telling voters that they faced a "death panel" under the ACA, also known as Obamacare.

“There's a provision in there that anyone over the age of 74 has to go before what is effectively a death panel,” said Akins at the town hall held by Rep. Gus Bilirakis (R-Fla.). “Yes, they do! Yes, they do! It's in there, folks!” Akins insisted when the audience attempted to shout him down.

According to the Post, this is not the first time that Akins has pushed conspiracy theories and outright lies -- using his Facebook account to push everything from the government using chemtrails to control the populace to accusing former Secretary of State Hillary Clinton of murdering her political foes.

On chemtrails, Akins suggested the government was killing "some elderly with lowered illness resistance with chemicals to lessen the load on social security and medicare."

Akins also said Bill and Hillary Clinton had potential trial witnesses against them murdered, and that Hillary Clinton's 2016 presidential campaign was financed by the Saudis.

Along with conspiracy theories, Akins compared black protesters to monkeys, said Muslims could not claim racial discrimination, and accused President Barack Obama of being a foreign-born Muslim.

A sampling of Akins' Facebook posts (via The Washington Post) as well as video from the town hall below: