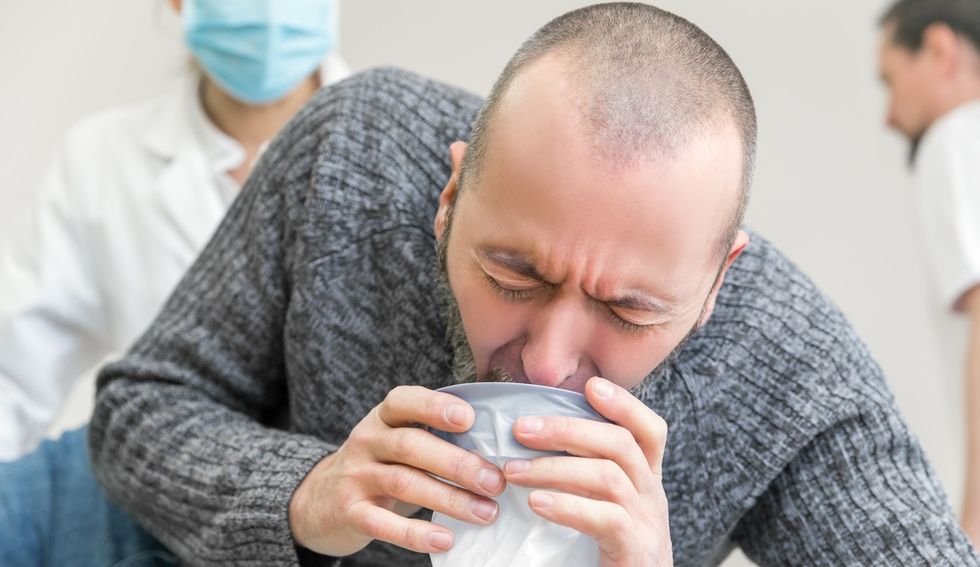 A sick patent throws up in a bag at a hospital (Screen cap).

Earlier this month, a draft of a Republican Obamacare replacement plan leaked to the press -- and it was almost immediately panned by the conservative House Freedom Caucus for supposedly being too liberal.

Despite the fact that the leaked plan was projected to significantly increase the number of uninsured people in the United States, House Freedom Caucus chairman Rep. Mark Meadows (R - N.C.) said on Monday that he would vote against it because it still nevertheless offered people refundable tax credits to buy insurance.

The Hill now reports that Majority Whip Steve Scalise (R - LA) has declared the leaked Obamacare replacement blueprint is "no longer valid" and is "not even representative of where we are" right now when it comes to crafting legislation.

The Republican Party has had seven years to craft a viable replacement plan for the Affordable Care Act, which they have vowed to repeal ever since its passage in 2010. The fact that Republicans are still not settled on any kind of replacement plan that could pass Congress is even starting to unnerve some voters in deep red states.

As ABC News reports, many Kentucky residents who have benefited from the ACA are nervous about losing their coverage if the GOP goes forward with its plans.

"If I didn’t have health insurance, I wouldn’t be alive today," Kentucky resident Leah Briemer tells ABC. "So I’m very concerned about the issues that are taking place right now."

Mike Taylor, a former coal truck driver who was diagnosed with black lung in 2015, tells ABC that he would have had a very hard time finding health insurance on the individual market if he hadn't qualified for the ACA Medicaid expansion.

"Around here you keep a job and you do as they say no matter what because you’ve got to work to survive," he said of the difficulties in finding insurance if you can't get it through your employer.

And Kelly Oller, a Trump voter who supported the president because she believed that he would improve the program to lower prices, now tells ABC she's worried about what she's hearing about potential replacement plans being discussed in Congress.

"I thought he was looking to repeal it to make it better, to make it more affordable and to make premiums hopefully go down and be balanced,” she said. “I don’t know what’s going to happen now."