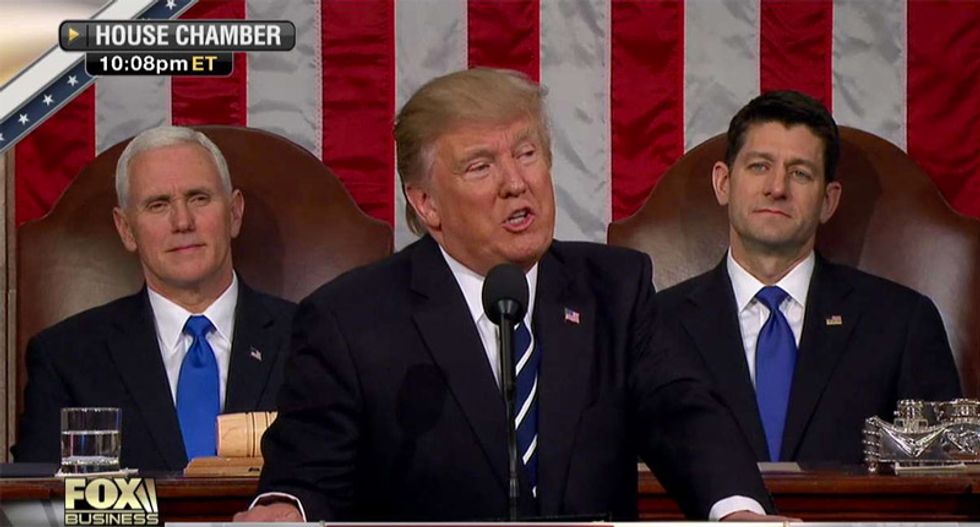 President Donald Trump drew audible gasps from the assembled Congressional members as he announced that he had asked Homeland Security to create an office called VOICE: Victims Of Immigration Crime Engagement.

It was hinted earlier in the day that VOICE would work with ICE as a liaison with "known victims of crimes committed by removable aliens," presumably to highlight specific crimes when immigrants were involved.

While some Congressional members gasped, those following Trump's speech and commenting on Twitter noted that VOICE would be used as a propaganda tool to whip up anti-immigrant hysteria, with one person noting this is "how genocides begin."

Read the tweets below:

VOICE could not sound more sinister. Like something @warrenellis would come up with after some bad clams. #JointSession
— Patton Oswalt (@Patton Oswalt)1488337121.0

Trump's VOICE is a foul way to vilify immigrants as criminals; an ext of his slur against Mexicans as rapists & murderers. #JointAddress
— David Leopold 🇺🇸 (@David Leopold 🇺🇸)1488336870.0

@samsteinhp I'm not a liberal, but I think the speech was full of promises without a plan. Offended by VOICE. All victims need advocates.
— DesignFinds (@DesignFinds)1488337889.0

Victims of Immigrant Crime Engagement- VOICE is a slap in the face to anyone killed by anyone in this country who was ignored #Trumpaddress
— Resist & Desist (@Resist & Desist)1488337884.0