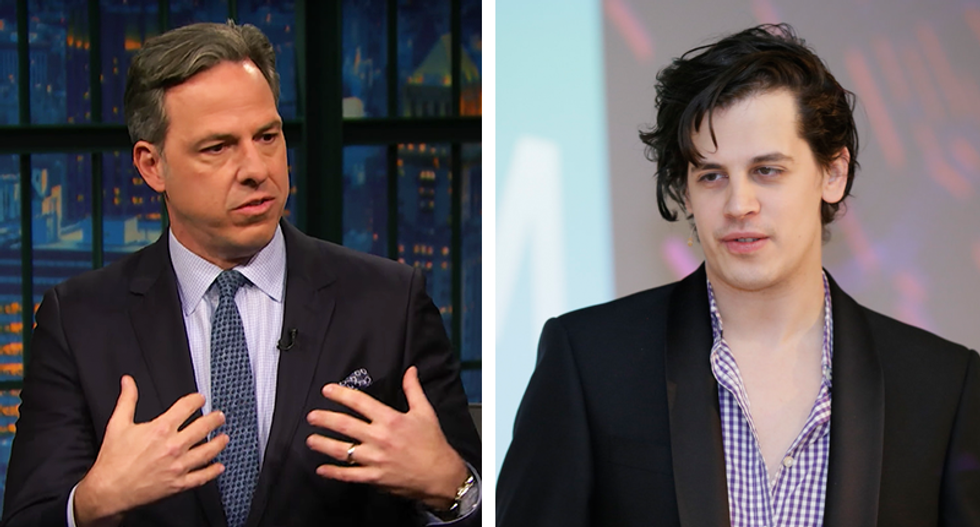 Yiannopoulos was officially disinvited from the Conservative Political Action Conference on Monday after a video surfaced showing him defending sex with young children. He was originally tapped to give the keynote address at the annual conservative conference, despite previously advocating for gay men to “get back in the closet,” among other highly controversial public comments.

In the video, Yiannopoulos argued some 13-year-old boys are old enough to consent to sexual relationships with adults and insisted adults who have sex with 13-year-olds are not pedophiles.

Following the announcement that Yiannopoulos was disinvited from CPAC, Tapper once again took to Twitter to shame the Breitbart senior editor.

“These are the semantic word games going on now,” he continued. “It’s all vile. Listen to his words on the tapes. Thirteen-year-olds cannot ‘give consent.’

In a series of Facebook posts, Yiannopoulous defended himself against critics, arguing the “deceptively edited” videos do not accurately reflect his opinion on pedophilia.

"I am a gay man, and a child abuse victim,” Yiannopoulos wrote. "I would like to restate my utter disgust at adults who sexually abuse minors. I am horrified by pedophilia and I have devoted large portions of my career as a journalist to exposing child abusers ... I've repeatedly expressed disgust at pedophilia in my feature and opinion writing. My professional record is very clear.”

"But I do understand that these videos, even though some of them are edited deceptively, paint a different picture,” he added.

Following his disinvitation, the Breitbart editor acknowledged he’s “partly to blame” for what transpired.

“My own experiences as a victim led me to believe I could say anything I wanted to on this subject, no matter how outrageous,” he wrote in a separate Facebook post. "But I understand that my usual blend of British sarcasm, provocation and gallows humor might have come across as flippancy, a lack of care for other victims or, worse, 'advocacy.' I deeply regret that."

President Donald Trump, who famously bragged about groping women without their consent, is still scheduled to speak at the conference