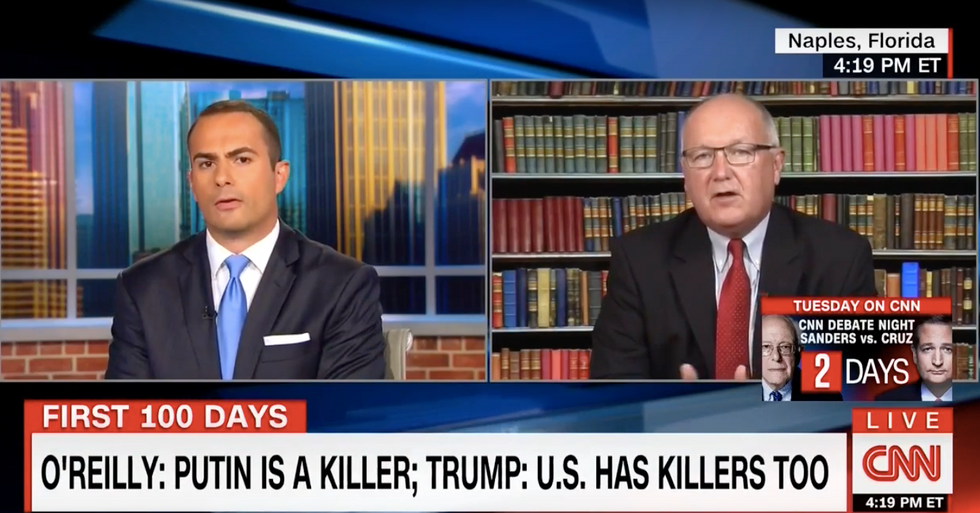 The former Michigan congressman insisted that in spite of Trump's assertion that "We have a lot of killers" in the U.S. that there was no moral equivalency in the president's statement that put the U.S. government on a par with Putin's Russia and that to assert that there was is "fake news."

"That's not what he said," Hoekstra insisted.

"But he said there are killers within the United States," Sanchez said. "That's unlike anything any president has ever said before and I don't think it's really fair to call that 'fake news' when we present the report to Republican leaders and they respond in a specific way."

"So, he's not talking about Americans there?" Sanchez asked.

"We've only seen a part of this transcript," said Hoekstra. "I assume he's talking about people that the United States has had to partner with."

"I've seen the transcript, sir," Sanchez said, "and he didn't clarify any further than that."

Hoekstra went on to say that Republican leaders who have spoken out against Trump's comments may not have understood what they were disagreeing with.

"Sir, that's what Mitch McConnell said," said Sanchez. "I mean, we can disagree on the interpretation, perhaps, on what the president said, but we're reporting what other Republican leaders said in response to the president. To call that 'fake news' is a joke."