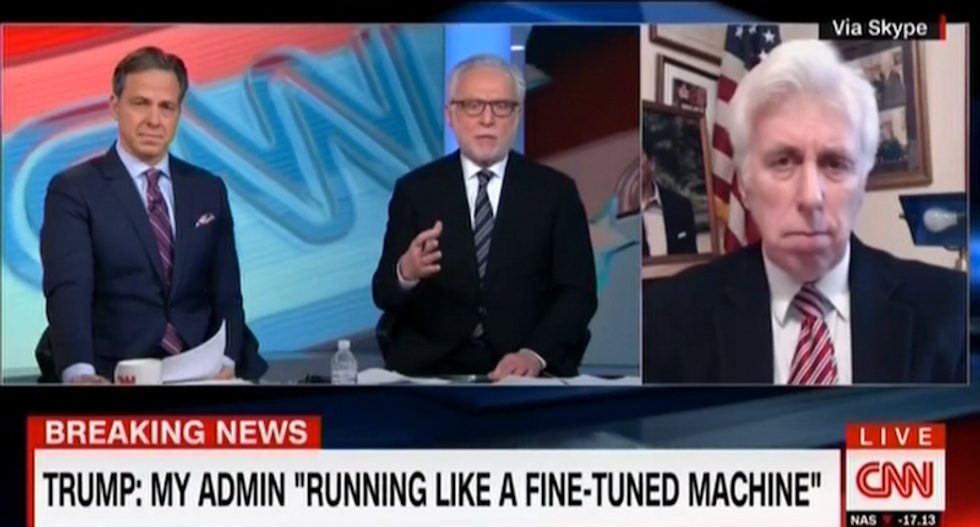 "From my perspective, I thought he was relaxed, he was funny, he was on point. He took the whole issue of the media, and he had a very candid conversation," Lord said. "This is the kind of conversation that I personally had with him a couple years ago in which he said some version of this same thing that he said today, except he was more specific."

Lord described the president as "candid, very dedicated to the job, very in command."

"What about some of the back and forth that he had with reporters? You used to work in the Reagan White House — is that really presidential four weeks into a new term?" Blitzer asked. "I think this is going to be his presidential style," Lord replied.

Tapper later mentioned a reporter from NBC who called out President Trump for incessantly calling the media "fake news" while also "saying things that are not true," noting the reporter was asking, "How do you have credibility to call us fake news?"

"I think it was a simple mistake," replied Lord, calling the reporter's question "nitpicky." He then proceeded to launch an attack on the network. "I had somebody here locally say to me during the campaign, you know, they recognized me, and they came over and they said — and it was a comment about CNN, which I'll be happy to make on air here, just so you know," Lord started.

He continued, "They said if Donald Trump sneezed, CNN would spend four days talking about his damage to the environment. That's the kind of perception, not just about CNN, but about the media at large, and that's the kind of feeling that he addresses."