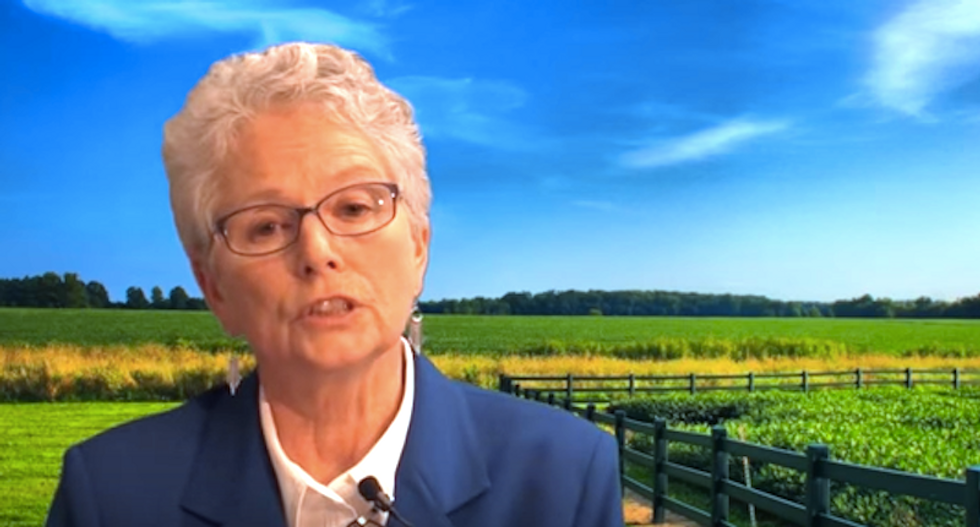 A viral video warning of a Muslim plot to take over the world has drawn nearly 2.7 million views -- and it was produced by a group with close ties to the Trump administration.

The video, posted in April 2015, stars Ann Corcoran, who became radicalized against Muslims after learning more than a decade ago that some African refugees would be resettling near her rural Maryland home, reported Vox.

“This process of Muslim colonization is called the hijra,” Corcoran says in the video, using the Arabic word for migration. “Mohammed told his followers to migrate and spread Islam, in order to dominate all the lands of the world ... and that’s exactly what they’re doing now.”

She started a blog, Refugee Resettlement Watch, which she used to promote viciously anti-Muslim and racist viewpoints until linking up with Frank Gaffney and his Center for Security Policy -- which has helped shape President Donald Trump's immigration policies.

Gaffney appeared at least 34 times on the Breitbart radio program hosted by Steve Bannon, who is now Trump's chief strategist and the reported author of his executive order banning travelers from some majority-Muslim nation.

According to the New York Times, Gaffney's work has been cited in speeches by Michael Flynn, Trump's national security advisor.

Kellyanne Conway, an advisor to Trump, did polling work for the Center for Security Policy, which awarded Sen. Jeff Sessions -- the attorney general nominee -- its annual "Keeper of the Flame" award last year for his efforts against the “totalitarian threat” posed by radical Islam.

Gaffney was banned from the Conservative Political Action Committee in 2011, after accusing two board members of secretly aiding the Muslim Brotherhood, and took part in shadow events hosted outside the conference by Breitbart News.

But Gaffney, who has been labeled “one of America’s most notorious Islamophobes” by the Southern Poverty Law Center, was invited back to CPAC two years ago -- when he hosted panels featuring anti-Muslim activists Walid Phares and Clare Lopez.

Trump has cited a shoddy poll conducted by Gaffney's group to justify his campaign promise to end Muslim immigration.

Gaffney and Corcoran boast close relationships with several key members of Trump's administration, including Bannon and CIA director Mike Pompeo -- who was the featured speaker at CSP's annual conference in 2015 and has appeared at least two dozen times on Gaffney's own radio program.

Gaffney and Corcoran -- who are part of a broader "counter-jihad" conspiracy movement -- have spent years promoting anti-refugee propaganda that has shaped Republican policy and now an executive order that has sparked nationwide protests.