Millions in Iran march against Trump 'threats' on revolution day 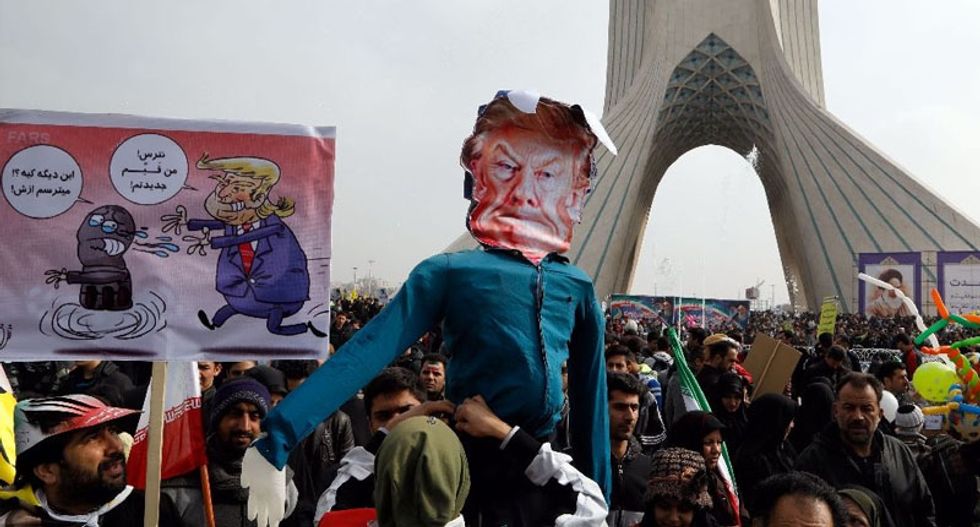 Iranians hold up a dummy representing US President Donald Trump during a rally in the capital Tehran on February 10, 2017 marking the anniversary of the 1979 Islamic revolution (AFP Photo/Atta KENARE)

Millions of Iranians marched on the anniversary of the 1979 Islamic revolution Friday in what the president described as a response to the new US administration and a rejection of "threatening language".

President Hassan Rouhani joined hundreds of thousands at an anniversary march through the capital, one of dozens of such events around the country.

"This turnout is a response to false remarks by the new rulers in the White House and the people are telling the world through their presence that the Iranian people must be spoken to with respect," Rouhani said.

"Iranians will make those using threatening language against this nation regret it.

"Anyone threatening Iran's government and armed forces should know that our nation is vigilant."

US President Donald Trump has taken an increasingly strident line towards Iran since taking office last month, warning that it was "playing with fire" and "on notice".

Last week, he imposed sanctions on Iran over a January 29 ballistic missile test and officials warned more might follow.

Placards bearing slogans against Trump were brandished by the marchers as they weaved their way through the streets of the capital in the wintry fog to the central Azadi (Freedom) Square.

One placard showed a caricature of Trump being punched by a hand wearing a bracelet of the Iranian flag.

"Thanks Mr. Trump for revealing true face of the US," said another placard echoing comments made by supreme leader Ayatollah Ali Khamenei in a speech this week.

"Iranians are not scared of threats," said another, bearing the faces of Trump, British Prime Minister Theresa May and her Israeli counterpart Benjamin Netanyahu.

The United States and Britain have long been derided by the regime as the "great Satan" and the "little Satan". Iran does not accept Israel's right to exist.

The rhetoric had been toned down after a July 2015 nuclear deal between Iran and world powers including the United States.

But at Friday's marches, the traditional "Down with America" slogans were everywhere.

Some marchers made a distinction between the American people and the Trump administration and carried placards thanking those who had opposed the president's controversial visa ban on the citizens of Iran and six other predominantly Muslim countries.

The ban was suspended by a lower court a week later and a federal appeals court on Thursday refused to reinstate it but Trump vowed to continue the legal battle for his order to stand.

"American people are welcome and invited to visit Iran," said a third.

The posters were following a Twitter hashtag #LoveBeyondFlags started by Iranian users to thank Americans who protested against the visa ban.

Trump has made no secret of his opposition to the nuclear deal agreed by his predecessor Barack Obama under which Iran agreed to tight controls in return for the lifting of international sanctions.

He said Iranians "don't appreciate how 'kind' President Obama was to them," in one tweet.

Foreign Minister Mohammad Javad Zarif, who negotiated the nuclear deal was among the top officials who attended the Tehran march alongside Rouhani.

Also present was Major General Ghasem Suleimani, head of the foreign operations arm of the elite Revolutionary Guards and one of the most controversial regime figures for Western governments.

Iran's leading reformist, former president Mohammad Khatami whose two terms of office, from 1997 to 2005, saw a rapprochement with the West, was absent.

He has been under a strict media ban since mass protests against the 2009 reelection of hardliner Mahmoud Ahmadinejad.

But he too urged supporters to join Friday's anniversary commemorations the "neutralise the conspiracies" faced by Iran.