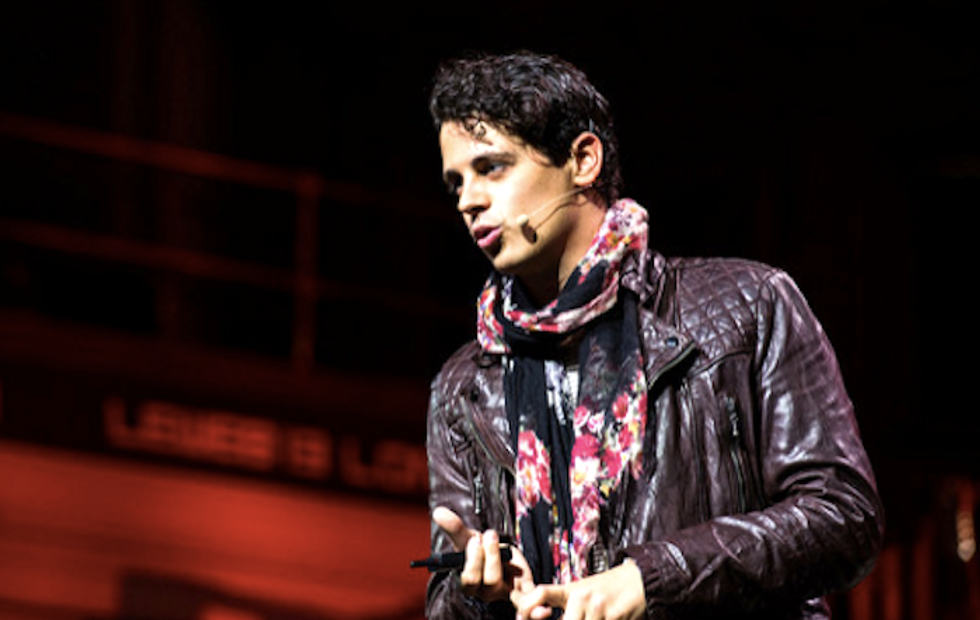 Former Breitbart.com tech editor and provocateur Milo Yiannopoulos has gone from meteoric media sensation to crashing-and-burning pariah virtually overnight due to statements he made last year that appear to condone and excuse child sex abuse.

According to Vice.com, however, there are some on the right who still believe in him and who see his abrupt downfall as a sinister plot by the "deep state" to eliminate one of conservatism's rising stars.

Some individuals among the neo-Nazis, white nationalists and conspiracy-mongers known as the "alt-right" have tried to quickly distance themselves from Yiannopoulos' 2016 remarks making light of sexual abuse of "younger boys" by "older men."

"The guy is totally done. No sane person will defend him," said Spencer on Twitter.

Just finished a video on Milo, uploading now. The guy is totally done. No sane person will defend him.
— Richard🎄Spencer (@Richard🎄Spencer) 1487651017.0

Yiannopoulos is not without champions, however. Mike Cernovich -- one of the main promoters of the "Pizzagate" conspiracy theory -- believes that Yiannopoulos is the victim of a "deep state" operation.

According to AlterNet, the "deep state" is "shorthand for the nexus of secretive intelligence agencies whose leaders and policies are not much affected by changes in the White House or the Congress." The agencies include the "CIA, NSA, Defense Intelligence Agency, and components of the State Department, Justice Department, Department of Homeland Security, and the armed forces."

On Tuesday, Cernovich -- who spread the fake news story that Democratic presidential nominee Hillary Clinton and top aides were running a child sex ring from a series of tunnels underneath a D.C. pizzeria -- went on a rant in which he said the malevolent actors of the deep state use child abuse as a means of cementing the loyalty of new inductees. Yiannopoulos, he said, was becoming too much of a threat to these forces.

"One third of the deep state are pedophiles, to get at that high level that they get at they have all kind of initiation rituals that a lot of people that wouldn't believe are possible but it's how they control you," Cernovich said.

Deep state operatives, he said, "make the new members molest children and record it. That accomplishes two things, one it gives them blackmail material on everybody for the rest of their lives but, even bigger, they know that if you harm a child, then you will do anything for them."

Lamoureux said, "The theory that this is a deep-state psy-op has taken hold in many of the circles of the alt-right. Jack Posobiec, another prominent alt-right social media figure, tweeted that a source told him $250,000 was spent on opposition research on Yiannopoulos, where "they" hired PIs and video editors"—former independent presidential candidate Evan McMullin is somehow involved as well. Lauren Southern, a 21-year-old Canadian media personality for the northern equivalent of Breitbart, also tweeted out that it was a hit job but later deleted her tweets."

On Tuesday night, InfoWars' Alex Jones posted a video called, "Milo Is A Victim Of Sexual Abuse, Does Not Promote Pedophilia." Jones went on at length detailing that Yiannopoulos' thinking was scrambled by his molestation as a young teen and that Stockholm syndrome turned him gay and made him sympathetic to abusers.

Jones went on to say that Yiannopoulos is the victim of a "witch hunt" by PC journalists and Hollywood pedophiles as well as "the Republican party," which is "trying to roll up the grassroots support of the nationalist and populist movement that is taken place."

"So it's interesting to watch these people, who see pedophiles around every corner and, like Yiannopoulos, have weaponized pedophilia accusations, scrambling to explain away Yiannopoulos' own comments," Lamoureux said. "Sometimes it's hard to tell when the call is coming from inside the house."